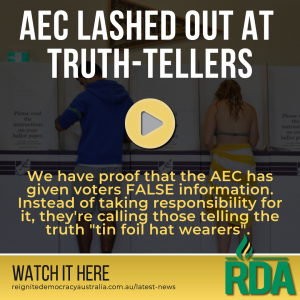 AEC lashed out at truth-tellers

This is so devastating. We have proof that the AEC has given voters FALSE information.

Instead of taking responsibility for it, they’re calling those telling the truth “tin foil hat wearers”. What a disgrace.

AEC lashed out at truth-tellers