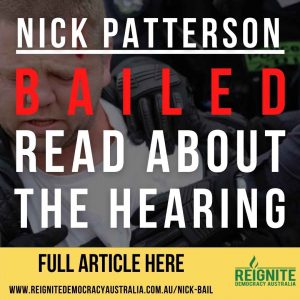 Another good man silenced in our fight for freedom…

Nick Patterson, a devoted husband, father of 4 and small business owner living in Victoria, Australia, has been in remand for a whole month after being arrested by Victoria Police leaving a ‘No mandatory COVID vaccination’ protest in Melbourne on 29th May 2021.

There were 7 co-accused who were also arrested but given bail within a few days. The Crown opposed all their bails, however, the Magistrate ruled in favour of the applicants every time.

Today is 29th June, a whole month later, Nick is still in custody fighting for a chance to get back to his family and business, who rely on him.

Court hearings via the internet are strange. I logged on a few minutes early and saw about 12 names on the screen. Nick Patterson’s camera was turned on and we could hear a lady in the room with him, probably helping him setup the Webex link. He started chatting to her not knowing that we could all hear him. They chatted about how cold it was and then she asked him what he was “In for?” He started explaining that he’s done a lot of speeches at protests and was going into some details. Then a strong manly voice came out of nowhere saying “We can all hear you.” Nick said, “That’s fine, I’m just chatting.” The voice replied, “I don’t want you to,” so he stopped.

In that moment, any human being would know that Nick has nothing to hide. It would only take a matter of seconds to realise that he’s an everyday Aussie who just wants to work hard and look after his family. He’s no criminal, and he’s definitely not a danger to society.

Andrew Norris, who’s representing the Crown in this matter, must have a lump in his throat trying to make a case that this humble everyday Aussie is a criminal who doesn’t deserve bail. Norris said, “We are opposing the application of bail based on the risk he poses of re-offending…it’s unacceptable risk.”

There was some confusion at the beginning because this case should be heard by the same Magistrate that granted bail to the co-accused. There is something called ‘Practise Direction’ which means if a Magistrate has already heard a related bail application and the circumstances are very similar, those findings should overlap into the co-accuser’s case. The matter should be heard by the same Magistrates to avoid any inconsistencies.

Norris was more or less told off by the Magistrate who said he should have known this.

The Magistrate ‘stood down’ for 30 minutes to decide what to do next.

Nick has been locked away from his family for a whole month and now there is uncertainty if his bail hearing will even happen. I could see the names on the screen: his wife; another woman with the same last name, perhaps his Mum or sister; I can see some of his friends on there as well… I can only imagine how nerve-racking this is for them. Probably his wife has a baby on her knee, one playing at her feet and the others watching in anticipation. We’re all waiting… hoping and praying that the hearing won’t be postponed.

We are quietly confident bail will be granted. Considering the co-accused were all granted bail, it wouldn’t be consistent if Nick wasn’t.

After a 30-minute wait, it was decided they’d continue on.

Senior Constable Telea Hall is the informant in this matter. She reads through the remand summary.

Norris insisted on showing some footage from the day. I thought it would be damning footage of Nick, but actually the footage I saw proved that the police were in fact the assault party, not the group of men who were walking away from the protest. Nick and the co-accuser’s defence is that it was the police who started the altercation. They approached the group as they were leaving, and one officer moved forward and punched one of the men two times in the head…this is what started the whole incident. Does one have a case of self-defence when a police officer is the assaulter?

Hall said they had things in their backpack indicating they were ready for an altercation. She referenced them having things to minimise the effects of pepper-spray, she made no mention of weapons.

She did go through the several blows Nick made toward police but she failed to mention any of the blows police made towards him. She said more than once that the “accused was verbally abusive” as if that’s an important thing to assert. Last time I checked, verbal abuse is not a crime.

Hall claims that Nick has a disregard for police and the court system. Join the club…half of Victoria has lost respect for the police in the last year.

She says, “It’s likely we’ll go back into lockdown and the accused would likely go to protests and encourage others to, which is a concern.” Personally, my heart sunk when she said that. She said it so flippantly as if lockdowns are like a change in the weather.

Hall also referred to the ‘Peacemakers’, a Christian group Nick has started recently recruiting people to join and learn more about their rights against the CHO directions. Hall seems very concerned with his ability to recruit and motivate people.

She admits to watching merely 2 of Nick’s video directly prior to the hearing. She basically did a crash study like a teenager who leaves their assignment to the last minute.

Damian Sheales, who is representing Nick, then had the chance to cross-examine her. He firstly made it very clear that everything she said about the videos and Nick’s online presence was not in the summary. The defence were not told that these subjects would be brought up at all.

I want to share some of his questioning with you. I’ve had to paraphrase some of these quotes as recording a hearing is illegal.

Damian: “Exactly how many videos of Nick have you looked at?”

Hall: “Two, this morning before the hearing.”

Damian: “You said that Nick was recruiting people to ‘fight police’. If I go and watch that video now, will I see those exact words in that context?”

Hall: “Ahh…um…well I just watch them this morning and I paraphrased what I watched in my notes.”

Damian: “Do you know much about the Peacemakers? Did you know that it’s a Christian Group and its website is named after a famous gospel?”

After a quick search I found the website (john8.net), here’s a section from it:

We are looking for people of strong character, who have a love for truth to join the Australian Peacemakers, as a unified community movement against world-wide government corruption.

We are witnessing the rise of tyrants and police units who frequently break laws at the state, federal and international levels.

Our movement aims to counterbalance these oppressive forces and to give back power to the people.

Members of this community are expected to diligently learn the basics of relevant law. Australian Peacemakers members are inspired to learn how to use the law and apply legal principles for the bettering of society.

Damian continues: “You are aware that the accusers allege that it all started with 2 punches from a police officer. There are multiple videos showing this? Does the footage you’ve seen show a police officer standing forward and punching one of the protesters twice in the head?”

Hall: “There are multiple accounts of what happened, I don’t agree with that but I know that’s what is alleged by the accusers.”

After a 1-hour lunch break, Damian continues to ask about the video after he’s now reviewed it.

Damian asked: “Did you watch the whole thing or just scrim through it?”

Hall: “I skipped through it, yes.” (Keep in mind, she did not admit that before now, she avoided admitting she skipped any of it).

Damian: “Your characterisation of the video is wrong and unfair…did you watch the part where he says the peacemakers would do everything according to the law?”

Hall: “But his interpretation of the law is wrong I believe.”

Damian went on to quote parts of the video he’d been able to watch during the lunch break and asked for Hall to agree or disagree with the quotes.

“We don’t want people to create or start a fight…”

Hall: “I believe his actions are very different to what he’s said in his videos.”

Damian then called Nick’s wife, Leirosa Patterson, to the microphone, and explains to her how severe it would be if Nick were to breach his bail conditions at all. She agreed to put their only investment, worth $65,000, as assurity that he would not breach bail. If he does, they will lose it all.

She said: “I have faith that my husband will not break bail. That’s everything we have to give.”

When they started talking about bail conditions, I felt relief within myself but more so for his wife and family members who were listening.

The Magistrate came back after a short break and said a few things: “Nick doesn’t go out to the street to purposely assault police. He goes to organised events and gets riled up…Nick’s family and business has suffered during the lockdowns and that could be a reason why Nick is so passionate on this topic…he’s entitled to his views.” The Magistrate seems almost sympathetic to Nick’s fight for human rights and freedom.

He questions the Crown: “considering the trial won’t be for 2-3 years, he has a family and a business…the Crown is still opposing bail even with strict conditions?”

Norris says: “I don’t have instructions to consent to bail.” We’ve all be online for 5 hours and it didn’t matter what was said; the Crown was never going to concede anything; that wasn’t their agreed approach.

After a 10-minute break, the hearing resumed and Nick was forced to agree to many bail conditions, one being a $50,000 assurity (if he breaches bail, it could cost the family that much). Of course, his communication with the co-accused and any online interactions is forbidden, and he isn’t even allowed to talk about the pandemic.

Another one bites the dust…

Another honourable, respectful man silenced in a democratic, supposedly-free country.

The powerful and influential people are threatened and silenced. This is not the first and it won’t be the last.

Another good man silenced in our fight for freedom...