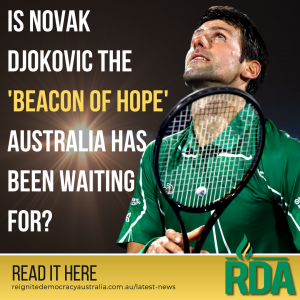 Is Novak Australia’s beacon of hope?

A win for Novak at this year’s Australian Open would put him into the history books with the MOST ever grand slams. He is currently tied with 2 other players.

His refusal to withhold his private medical information is not driven by pride or arrogance. He is not motivated by money and is willing to put his entire legacy at risk…why? TO STAND UP FOR HUMAN RIGHTS!!! It’s really that simple.

He doesn’t need a publicity stunt to be famous…he’s world no.1 in tennis! He doesn’t need sympathy or help, he has a great family who backs his decision.

Unlike many Australians who have jeopardised their financial stability to uphold their rights, he doesn’t have to worry about that. However, he is putting his legacy at risk… which is heroic!

One day he was just the world no.1 tennis player, the next day he is a beacon of hope for the entire freedom movement, especially in Australia.

His actions will empower and encourage millions of people to hold their heads high and keep fighting for their rights. He has become so much more to us than a famous tennis player, he is now our hero, our leader, and our beacon of hope.

He isn’t folding under the pressure, he is fighting it till the end. Based on his father’s comments, which you can see below, his family is proud of his fortitude.

We all see more in him now than his tennis success. We are so blessed to have such a strong man in our country fighting for his, and our, rights.

This is not just Novak’s fight, this is a fight for worldwide liberty and freedom. This is a fight against corrupt, filthy, greedy politicians who think they can control all of us. Spoiler alert…THEY CAN’T!

Message from his Father, Srdjan Djokovic

“My son is hostage in Australia tonight but he has never been more free.”

From now on, Novak has become the symbol and leader of the free world, the world of countries and poor and oppressed people.

My son Novak Djokovic showed that even a small heroic country like Serbia can have the greatest athlete and tennis player of all time and that the truth can no longer be hidden.

Tonight you can lock it up, tomorrow you can chain it up but the truth is like water and it always finds a way.

Novak is the Spartacus of the new world who does not tolerate injustice, colonialism and hypocrisy but fights for the equality of all on this planet, regardless of skin color, religious belief and money they have.

Novak has proven that you can achieve any goal if you have a dream and his dream is shared by billions of people, including children who look at him as an example. Maybe the rich world won’t let him continue playing tennis, but in doing so, he will reveal his true face and start a much more serious match.

On one hand, there will be greedy and arrogant members of global oligarchy and on the other, a proud and free world that always believes in justice, truth, fair play and the dreams of its children. 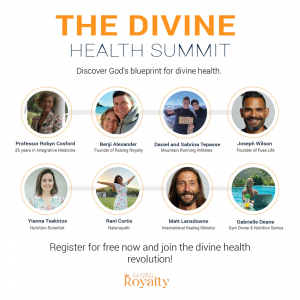 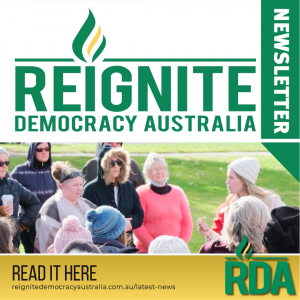 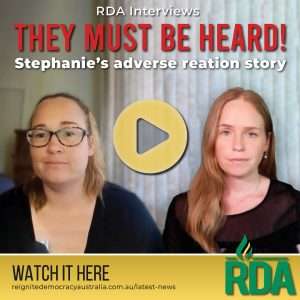 Is Novak Australia's beacon of hope?