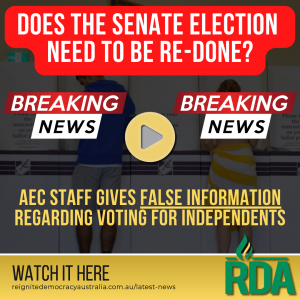 BREAKING NEWS – does the senate election need to be re-done?

Have a watch of this video…it speaks for itself.

This is VERY SERIOUS. Please call AEC to complain if you find this concerning – 13 23 26

The AEC even admitted they need to RE-TRAIN their staff…it’s too late! The election is in three days and millions have ALREADY VOTED.

“Hi Morgan. Have you made a complaint directly to us to enable us to action it or just published it here for the interest of your followers?
We are re-issuing instructions to our staff to ensure they know the correct answer and provide it moving forward. This compilation features a small number of frontline, temporary call centre staff operators (we’re dealing with hundreds of thousands of calls, with thousands of granular enquiries about the electoral system).
They have provided an incorrect response but have also been recorded and published on the internet without consent.
If you haven’t submitted a formal complaint, we recommend that as the obvious, appropriate channel.
Regarding the structure of the ballot paper, this is a matter for Parliament if you feel strongly about change – we must setup the ballot paper in line with the legislation.”

BREAKING NEWS - does the senate election need to be re-done?