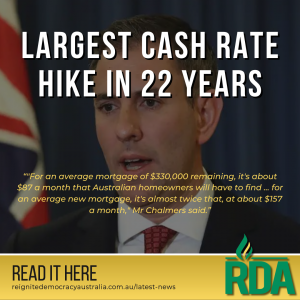 The Reserve Bank of Australia (RBA) has announced it will increase the cash rate by 0.5 percentage points to 0.85 per cent, the largest hike since 2000.

The announcement came after the RBA’s monthly board meeting and is the second hike in as many months, after the rate was kept at a record 0.1 per cent between November 2020 and April this year.

The RBA board said the rise was “a further step in the withdrawal of the extraordinary monetary support that was put in place to help the Australian economy during the pandemic” and signalled that it expected to take “further steps in the process of normalising monetary policy conditions in Australia over the months ahead”.

“For an average mortgage of $330,000 remaining, it’s about $87 a month that Australian homeowners will have to find … for an average new mortgage, it’s almost twice that, at about $157 a month,” Mr Chalmers said.

“This will be very difficult news for all of those Australians who are already facing skyrocketing costs of living in this country.”

“It is the universal expectation across economists and government and the Reserve Bank that this inflation challenge will get harder before it gets easier.”

Mr Chalmers also said the government would “do what it can” to alleviate price pressures on Australians.

“There is some cost-of-living relief in the budget as it stands and our responsibility as the new government is to make sure in the October budget … that there is a cost package that includes our policies on childcare and medicines but also to get that longer-term downward pressure on energy prices and real wages moving,” he said.

“This cost of living crisis has been brewing for the best part of a decade.”

In a statement, RBA Governor Philip Lowe acknowledged inflation in Australia has increased significantly, and said it was higher than was previously expected.

“Global factors, including COVID-related disruptions to supply chains and the war in Ukraine account for much of this increase in inflation,” he said.

“But domestic factors are playing a role too, with capacity constraints in some sectors and the tight labour market contributing to the upward pressure on prices. The floods earlier this year have also affected some prices.”

Mr Lowe said inflation is expected to increase further before declining towards the 2 – 3 per cent range next year. The cash rate rise in May 2022 was the first hike in over a decade. Source: SBS News

The announcement, which came after the RBA’s monthly board meeting on Tuesday, is the second of its kind in as many months.

In May, the RBA made the decision to lift the rate to

from a record low of 0.1 per cent — the first hike in over a decade.

The weekly ANZ-Roy Morgan consumer confidence index – a pointer to future household spending – was also released on Tuesday, which is now at its lowest level since mid-August 2020, down 4.1 per cent for the week.

The Australian Institute for Petroleum said the national average petrol price was down 3.1 cents in the past week to 196.9 cents per litre, ending six weeks of consecutive increases.

However, such modest relief could prove short-lived with global oil prices on the rise again and wholesale petrol prices already near 190 cents a litre.

Persistent talk of a “gas crisis” is also likely to undermine sentiment.