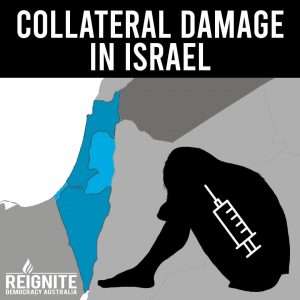 Collateral Damage in Israel: The Deal that Keeps on Killing

It was an historic moment – a ‘great day for Israel’. On 12 November 2020, Prime Minister Benjamin Netanyahu signed a deal with Pfizer to effectively turn Israel into a laboratory experiment. The entire nation was to be jabbed (never mind that there was zero long-term data available).

The New England Journal of Medicine recently reported that the Pfizer vaccine efficacy has dropped to 20% within 5-7 months. Instead of admitting to vaccine failure, the government has doubled down – mandating booster shots in order to access pubs and shops, rendering redundant the infamous ‘green passes’ of 2 million Israelis (who refuse to get the extra shot).

Before the vaccine rollout, from March to November 2020, Israel reported a total of 2,639 COVID-19 deaths. This year, the total currently stands at 8,030.

While this is a tragic story in and of itself, what hasn’t been reported until recently are the number of adverse effects connected with these vaccines. There seems to be a kind of kryptonite associated with the victims’ stories. An apparent media blackout. Many doctors simply refuse to admit the connection to the vaccine.

Enter Avital and the Israeli People Committee. This brave group has created a video called ‘The Testimonies Project’ sharing the stories of 39 victims (out of thousands which were collected). The documentary has now been viewed more than 400,000 times on Rumble.

The stories are heart-breaking.

There is the 46-year-old mother of three who suffered a stroke after the second shot, which has resulted in partial paralysis and an inability to perform her usual daily functions. ‘I used to be the happiest person, active – now my life is ruined,’ she says. ‘In my eyes, my life ended.’

A 27-year-old man has now been hospitalised twice with myocarditis. He has been left unable to work. The vaccines have destroyed his life. ‘I made a huge mistake. I hope people will realize it’s not a game, it’s not just getting a vaccine and then moving on.’

A 48-year-old woman who didn’t want the shot but felt pressured to because of work requirements, now finds it difficult to breathe. She has constant headaches and fatigue and can’t do whatever she wants anymore. She describes the decision as the ‘dumbest thing I ever did – I had one moment of fear and got the vaccine.’

A 41-year-old man rushed to the ER after his second shot and was admitted for 5 days with a severe ear infection. He has since suffered two strokes which have rendered his left side almost paralysed. He describes the sensation as feeling like someone is ‘cutting off his arm and leg all the time’. He had no background illnesses before taking the vaccines.

A mother shares the story of her 34-year-old daughter who is now completely disabled and has been in hospital for 5 months. She was diagnosed with an autoimmune disease and was in ICU for a month on a respirator. She doesn’t speak, doesn’t walk and cannot move her arms and legs anymore.

The brother of a 25-year-old woman tells of his sister’s experience when she started having severe headaches and a CT scan discovered fluid in the brain. She underwent immediate surgery and then an additional surgery from which she did not recover.

A father tearfully shares about his 18-year-old son who went to sleep one night two months after the second shot and then they found him dead beside his bed in the morning. He had experienced a cardiac arrest.

Each testimony is unique, but the message of those who have suffered is the same. They wish they had never taken the Pfizer shots and they warn others to avoid them at all costs.

Watch the video and share it with everyone you know.

Collateral Damage in Israel: The Deal that Keeps on Killing