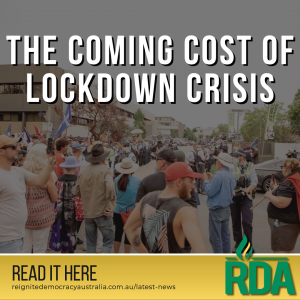 The Coming Cost of Lockdown Crisis

There is a cost of lockdown crisis coming. It will be economic and political. Take the latter first. This political lockdown crisis, in my view, will really only hit right-of-centre parties. Left-wing parties (I’m about to generalise) tend to be peopled by voters who trust big government and for whom equality concerns easily trump freedom concerns. On the left, to continue to generalise you understand, are the parties of the public servants, the human rights barrister caste, the well-off, the university, public broadcaster and corporate HR classes, the virtue-signallers (but I repeat myself) and those on welfare. Almost none of those groups did badly out of the pandemic and the brutal, despotic, heavy-handed governmental responses we saw pretty much everywhere outside of Sweden, Florida, South Dakota, a few other US States, and a few islands like Iceland and Taiwan. In fact, most did very well. The super-rich did super well.  To be blunt, these castes had no skin in the game when it came to the costs of these liberty and small-business-crushing ‘non-pharmaceutical interventions’. (And my Lord I hate these Orwellian acronyms.)

On the other hand, all right-of-centre parties have a segment of their voting base that really cares about freedom-related issues. Now certainly the big tent, broad coalition that makes up right-of-centre parties includes your low-tax types, some of whom aren’t too fussed either way once you leave the economic sphere. And there are social conservatives, some (not all, but some) of whom aren’t overly concerned about freedom issues at all. But there is no denying that a noticeable chunk of all right-leaning political parties is comprised of voters who care deeply about freedom issues, a fair chunk of whom did very badly indeed out of the pandemic. And let me be clear, I mean they did badly due to governments opting half-heartedly to emulate the ‘let’s copy China and weld them into their homes’ strategy. You know. There we are in November 2019 with a World Health Organisation pandemic plan that is based on a century of data and that says ‘never lockdown, never shut schools, give people the information’. Yet other than in Sweden really (whose wonderful chief epidemiologist Anders Tegnell said ‘I just copied the existing British and WHO plans’ which the data now shows was the correct approach) this gets tossed out the window after China welds a few cities’ people in their homes and journalists go down the fear-porn route in reporting from Italy.

Well, as I said the costs have overwhelmingly hit a segment of the political base of right-of-centre parties. Many a person’s life has been unalterably ruined. And many are not in the forgive-and-forget mode, however much these same right-leaning parties now do not want to talk about their despotic pandemic approaches. At this point I usually get all sorts of unsolicited (and not infrequently hostile) emails telling me how wonderfully Australia did in its pandemic response. Heck, half the Sky After Dark hosts and three-quarters of the op-ed writers in the Australian continue to say this. In my view, it’s palpably untrue. UNSW academic Gigi Foster has spent the last year getting the data together and she says it is nothing like 40,000 lives that the Morrison government’s ‘let’s not say a bad word about any despotic lockdown anywhere in the country’ approach saved. At most it was not even 10,000. In quality-adjusted life-years it was a far less impressive figure again. But that’s just one item in the cost-benefit ledger, deaths ‘with and because of’ Covid. On the other side there are going to be all sorts of deaths because of lockdowns themselves.  This data is starting to pour in. In the US more people died of alcoholism than Covid in 2021. Wonder why? There are missed health checks. Two years of schooling that poor kids will never make up, never, and that will have big health effects. And get this. A huge pandemic literature review and meta-analysis out of Johns Hopkins by Professors Hanke et al. now calculates the ‘how many Covid deaths did lockdowns save compared to Sweden pre vaccines’ at barely over two per cent…. [so] ‘had little to no effect on Covid mortality rates’. Remember, that’s the sum total of the benefits side of the ledger. Meanwhile the costs will be, heck are, immense. And these authors have a small section that is relevant to Australia. When you look at island countries – Australia, NZ, Iceland, Taiwan, South Korea, Japan – there is almost no statistical difference in Covid deaths per million despite some countries (think Oz, think NZ) being despotic and others (think Iceland, think Taiwan) being much, much closer to the Swedish approach. All island nations did extremely well. I wonder what the lockdownistas have to say about that? Well, nothing of course.

But here’s the thing. Some of us on the right of the political spectrum are not going to forget what our side of politics did to us. It’s one of the reasons the Morrison government lost I think (and why I’m glad it lost). It is why in the province of Alberta the conservative premier was a fortnight ago removed by his side of politics; he had caved in too much to the despots. It’s why Boris is in big trouble in Britain and people are obsessing over a few 30-minute parties – because if you are going to impose insanely irrational rules on all and sundry and make the police enforce them then if you’re caught cheating it’s not going to help you to plead ‘we need a bit of perspective here’. And let’s be clear that Boris showed infinitely more resolve in standing up to the fearmongers than ScoMo ever did – just remember the 1,200 supposed UK public health experts who wrote the open letter in mid-2021 saying the sky would fall if Boris opened up. Boris did anyway and it didn’t. But we on the right are still angry and want ‘politicians on our side’ to be taught a big lesson. Compare that to Governor Ron DeSantis in Florida who locked down for not much more than a fortnight and then realised this was wrong and moved straight over to the Swedish approach. He was literally called a ‘granny killer’ by the media. Last election DeSantis barely pipped the Democrat; today he is over ten points ahead – the rewards of political bravery!

So that’s the political side. The economics is easy. All but the uber-Keynesian economists believe that inflation is everywhere and always a monetary phenomenon. Print money like a Zimbabwean and borrow and spend like a drunken sailor and (Modern Monetary Theory notwithstanding) there will come a day of reckoning. It may well bring stagflation and worse in its wake. In part this will be another effect of the pandemic response, though actually it was happening before Covid. This time, though, the politics will hit both sides because the left-leaning parties are in even more thrall to uber-Keynesianism than the right (and Treasury and the Reserve Bank). And the Left barracked even more for this big spending, big Keynesianism.

Want to know what it’s going to be like for indebted governments and house-owners when interest rates rocket up? Just wait and see.

The Coming Cost of Lockdown Crisis