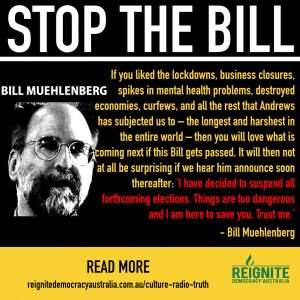 During the past two years we have seen shocking moves against freedom, democracy and basic human rights – all in the name of saving us from a crisis. One thing these state responses to Covid demonstrate beyond a shadow of a doubt is this: Western governments can very easily and very quickly descend into tyranny as they strip us of our most fundamental liberties. Any crisis – real or imagined – can serve as a pretext for more government power and control, and more politicians lording it over the masses.

This has reached unprecedented heights in Victoria. It has been so bad that one can rightly ask: ‘What’s next? Will elections be suspended in order to keep us safe?’ Don’t laugh – this has happened before. Simply recall what transpired in Germany in the 1930s. Things are becoming equally alarming here. Indeed, if you ever needed the perfect dictionary definition of what it means for someone to be ‘drunk on power,’ you would simply look at Andrews. He and his dangerous power grabs are getting worse each passing week.

Consider the latest: Recently the Andrews government tabled its Public Health and Wellbeing Amendment (Pandemic Management) Bill 2021. In it the chief health officer’s powers would be lessened, but the premier would gain new authority to declare a pandemic, and the health minister would have the power to make unfettered public health orders. Worse yet, anyone said to be violating these health orders would face two years in jail or a $90,000 fine! See the proposed legislation here: https://www.smh.com.au/interactive/hub/media/tearout-excerpt/4025/591316B.D12-(1).pdf

If this ugly assault on freedom, democracy and the rule of law passes, it may be the last nail in Victoria’s coffin. Parliamentary democracy is already dying in Victoria, and Andrews, a handful of bureaucrats, and three cross-benchers in the Upper House are running the whole show. For months now Chairman Dan has been doing grubby deals with the former Sex Industry head Fiona Patten, the Animal Justice Party, and the Greens.

It is the oldest trick in the political book: they scratch Dan’s back and he scratches their backs. He has been getting his ‘temporary’ emergency powers passed by cutting deals with them. Sadly the Liberals do not have the numbers to stop them, so whatever Dan wants, Dan gets.

And now he wants these full-tilt dictatorial powers – forever! Yet just a few days ago he was insisting that there would be no more lockdowns and the like in Victoria. If that is the case, why the need for these oppressive new powers? Thankfully many are warning about this ugly power grab:

Sky News host Paul Murray says the new pandemic laws being proposed in Victoria are “madness” from the premier who recently promised there would be “no more lockdowns”. “The health minister, not the chief health officer, would be the one making COVID rules,” he said. “But how’s this, it’s the government, not the parliament that gets the power to extend the powers.” Mr Murray said the fines which could face ruler breakers are “extraordinary”. “Individuals could face $90,000 fines for breaking the rules that Chairman Dan wants to put inside this legislation for lockdowns he’s promising aren’t going to happen anymore. And for companies that deliberately break COVID or pandemic rules – fines that would destroy any business – $425,000.” https://www.skynews.com.au/opinion/paul-murray/victorias-proposed-pandemic-laws-are-madness/video/5547141867ddd6d2cd7f0e8eb6c8b4a4

Victorian Premier Daniel Andrews is “not just drunk on power” – he is “abusing it”. Mr Guy discussed proposed laws which could strip the Victorian chief health officer of power in a pandemic and allow the Premier to have accountability for public health decisions.  The opposition leader said this would be giving “the most power-hungry politician in Australia licence to declare a pandemic” and ultimately giving him “the power to determine what he wants to do for an indefinite period of time”. Accountability would rest not with “the cabinet, not his party room or caucus, not the Parliament but him,” Mr Guy said. “Giving one person that amount of power doesn’t appear to be … anything that I can imagine to be democratic about it.” https://www.skynews.com.au/opinion/peta-credlin/daniel-andrews-not-just-drunk-on-power-but-abusing-it/video/62140de0f6d2842ffc4104af1ec4f42a

If you liked the lockdowns, business closures, spikes in mental health problems, destroyed economies, curfews, and all the rest that Andrews has subjected us to – the longest and harshest in the entire world – then you will love what is coming next if this Bill gets passed. It will then not at all be surprising if we hear him announce soon thereafter: ‘I have decided to suspend all forthcoming elections. Things are too dangerous and I am here to save you. Trust me.’

The one about the incredible bail conditions set because the charge will never stick, and a dream ahead of an arrest. Our guest is Monica Smith from Reignite Democracy Australia.