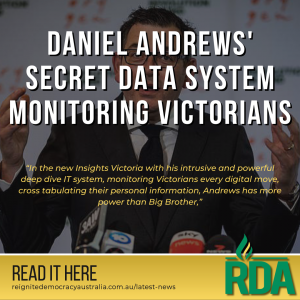 The following article from the Herald Sun.

It has been revealed Victorian Premier Daniel Andrews has a data agency to monitor Victorians’ everyday activities, including social media sentiment and credit card transactions.

The Sunday Herald Sun has obtained documents about the agency, called Insights Victoria, under freedom of information laws.

The publication found the dashboard, which is updated daily, uses publicly available data, but also “commercial in-confidence” and “sensitive” data not permitted for third party or public release.

It was set up as part of the government’s Covid response in August 2020, but a September 2020 briefing note said the system would evolve and inform decision-making beyond Covid, Herald Sun reported.

“Insights Victoria can reduce the time and effort required to quickly understand the ‘state of the state’ across all portfolios,” the document read.

A guide said the document was “designed to be the single truth source” for government.

Ministerial private offices and senior public servants had some access to the system on a need-to-know basis.

Opposition Treasury spokesman David Davis said the fact Mr Andrews’ political staff had full access suggested he was prepared to use the data for political ends.

“This really feels like a Brave New World. It truly does have the feel of a dystopian society where one man and his office have overweening power buttressed by access to unprecedented streams of personal information.”

“The data provided is not market sensitive and is anonymised,” the spokesman said.

“All governments use data to inform policy decisions and deliver services.”

It is understood the data purchased from financial institutions was used until late 2021 to see physical movement across the state at a local government area level.

The Department of Premier and Cabinet stressed all relevant security controls and protections were used as required under the Privacy and Data Protection Act.