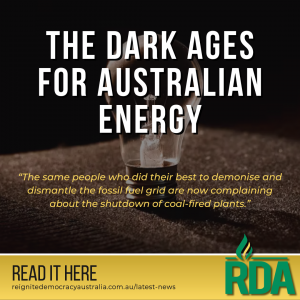 The Dark Ages for Australian Energy

Unreliable energy – or maybe unreliable system. Time to unplug from the mainstream system…

When the sun finally sets on the West, the English-speaking peoples will find out that they are as fragile and expendable as the starving third-world children used by aid organisation to pick pockets.

Modernity is held together by cheap energy, not the rainbow-padding nonsense of progressive politics that does little but catch fire on the frayed wires of civilisation, much like Rudd’s notorious pink batts.

Yesterday, millions of Australian homes on the east coast were told to switch off non-essential appliances after blackouts began and extended short-falls loomed. Energy suppliers cautioned the affluent Teal-heartland of Sydney’s Northern Beaches that they were at risk of losing power as temperatures plunged. Suggestions such as ‘consider how many rooms need to be heated’ were made, presumably targeted to the mansion-dwelling community who voted to put ‘Climate Change’ above energy security.

Green-tinged Queensland suffered a similar problem, with the situation so concerning that the Australian Energy Market Operator (AEMO) put in place a $300-per-megawatt-hour price cap.

As a result, everyone is turning to gas suppliers in a panic, demanding that gas companies ‘find gas’ and offer it at ‘low prices’ – or else? This would be after the government went out of its way to deny the gas industry in favour of their preferred ‘renewables’ mates. The gas industry is unsurprisingly reluctant to help out, considering they require $500-per-megawatt-hour to profit.

As a side note, the climatecouncil.org.au insists, ‘Output of oil and gas in developed nations needs to be cut by 74 per cent by 2030, with a complete phase-out by 2034.’ That is going to be tricky with renewables leaning on gas to cover the giant voids in output. Basically, if you’re still breathing, somewhat warm, and well-fed – you’re probably a burden to the climate goal.

Back in the real world, if governments and energy suppliers are begging people to turn off their toasters, it’s a good thing the Australian population ignored Labor’s demands to switch to electric vehicles or we’d be waking up to streets littered with expensive, useless cars.

The price cap has created its own problem, with the Australian Energy Regulator issuing a letter to power generators instructing them to ‘bid capacity into the market’ regardless of the cap as blackouts threaten across the country. The existence of price caps causes energy providers to withhold supply to protect revenue – which is why socialist-style intervention on market prices rarely works. The government gives ‘stuff away for free’ but businesses can’t do that or there will be nothing for tomorrow.

According to an article in The Australian, AER chair Clare Savage had this to say:

‘Recently the AER has observed that following the application of administered pricing in the NEM, generators are withdrawing available capacity from the market. This behaviour may be motivated by generators seeking to avoid the administered pricing compensation process in favour of the AEMO directions compensation process. As you know, market participants must not, by any act or omission, whether intentionally or recklessly, cause or significantly contribute to the circumstances causing a direction to be issued, without reasonable cause.’

New Energy Minister Chris Bowen has done a lot of theatrical waving of his hands, pretending that there’s ‘nothing to see here’ as the country faces an energy crisis.

‘The operator tells them there is no need to be concerned about blackouts in the immediate future,’ Bowen said, giving a speech that should never have to be made in a responsible, first-world nation. ‘Nobody should turn off any power usage that they need, that they are using for their comfort or their safety. Nobody should do that.’

When the energy grid was truly competitive, Australia had reliable, cheap, and plentiful energy. The interference of government has had disastrous consequences, with public money being tossed at ‘renewables’ to make them look more ‘profitable’ when in reality, they are propped up by taxes. Productive energy sources have been punished by severe restrictions on access, expansion, and investment. Banks have gone so far as to consider denying loans in the fossil fuel sector to keep green-themed shareholders happy.

The same people who did their best to demonise and dismantle the fossil fuel grid are now complaining about the shutdown of coal-fired plants. Well kids, this is a glimpse of the future promised by Labor, the Greens, Teals, and Liberal moderates.

There is a solution to both ‘climate woes’ and energy security in the form of nuclear energy – a technology for which Australia is uniquely placed to benefit. Labor has given a definitive ‘no’ on nuclear, almost certainly because they felt their green investment portfolio shudder in terror. The introduction of nuclear to the Australian grid erases the need for solar, wind, and battery storage – destroying profits for the ‘green economy’.

At the same time as federal Labor has been out – quite literally – begging coal-fired plants to increase their operation to stave off disaster, Western Australia Labor Premier Mark McGowan has promised to close all state-owned coal-fired plants by 2030 and gift renewables barons $4 billion in public money. He complains that the ‘glut of excess power’ produced by them is costing money – so one is left to wonder why McGowan’s idea of saving $3 billion over ten years involves spending $4 billion.

‘We’re standing at a point where to continue business as usual would lead to around $3 billion of losses by the end of the decade. Those losses either have to be covered by taxpayers or would lead to dramatically higher power bills for West Australians – while still continuing to emit higher levels of carbon emissions. Either way, it’s simply not sustainable in the long term.’

Why not just close the power stations and let the renewables sector expand on its own? Or is it not profitable without a drip attacked to the state coffers…?

No, don’t bother looking for the Liberal Party. It was former-Liberal Leader Zak Kirkup’s idea in the first place. The great news is that Western Australia doesn’t have an extension cord long enough to cross the desert, so McGowan will have nowhere to hide when it all goes horribly wrong.

All this is taking place while bored billionaires purchase coal-fired power stations for fun and shut them down unnecessarily.

The result of closing power plants is a sudden and drastic reliance on gas – of which there isn’t an infinite amount to go around. Shortages are being flagged, even if resources are expanded. Gas was meant to prop renewables up for decades, but the determination for ‘climate action right-now’ is resulting in the ridiculous culling of gas reserves which will, in turn, limit the lifespan of the renewables industry.

This is all complete madness when a few strategically placed nuclear plants could permanently solve the energy crisis with next-to-no emissions. For those who say, ‘oh nuclear is expensive!’ weren’t they telling us that ‘no expense is too much to save the world from extinction?’ We’re not told the total green price tag, but subsidies for renewables alone were set at $11.6 billion in 2021.

The answer is sitting in front of Australia, but governments, the energy industry, and mining companies have no interest in pursuing nuclear until they have dug up and sold every last dollar from other resources that are set to be devalued when the ‘Nuclear Age’ arrives.

Energy supply doesn’t care much for virtue-signalling politics or the ambitions of career politicians. It is a world of engineering absolutes, brick walls, and fail points. Reliable, stable power is essential to sustain the lives of millions of people where even short-lived blackouts pose a serious threat.

Hippy colonies can get away with a few cold nights or a failed market garden by collapsing around a campfire for a bit of weed-induced ‘Kumbaya’ followed by a sneaky trip to the local shops. When the same thing happens to a city, panic takes hold. Investors pull out. Businesses close. The elderly freeze to death.

Any government that chooses to play politics with energy is reckless to the point of criminal. Finally (and just for fun) what happens if Australia finally gets its 100 per cent magnificent wind and solar grid backed up by battery power during the night when there’s no wind?

The Dark Ages for Australian Energy