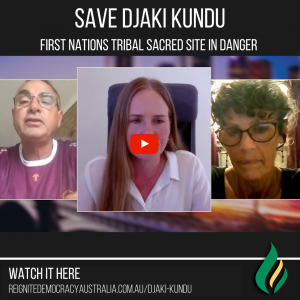 Witt-boooka and Diane tell us about the Djaki Kundu, an ancient and sacred healing site near Gympie, containing ancient sacred relics, built thousands of years ago by Kabi Ancestors. When the site became threatened by QLD Transport and Main Roads earlier this year, the tribe occupied the site in an effort to protect it from unnecessary desecration and destruction by the government.

After nine months of protest, local police, who had earlier stated that they had no intention of forcibly removing the tribe unless there was a court order stating that the land did not belong to the Kabi people, received an affidavit from the CEO of Transport and Main Roads claiming that he had peaceable possession of the land. As a result, on October 15, 2021, the tribe, their supporters, and advocates were forcibly removed and six arrests were made, four for trespassing and two for failing to comply with a move-on direction. All those arrested were aged between 55 and 71 years of age.

Australian laws make it illegal to destroy ‘Aboriginal cultural heritage’ or ‘aboriginal relics’, however, as Diane points out in this interview, it is the government who gets to decide what is considered ‘sacred land’. It’s yet another case of the fox guarding the henhouse.

In this interview, we discuss why these actions are unlawful and how the indigenous and non-indigenous communities can work together to help protect each other from all government overreach.

The Kabi tribe and their advocates and supporters are hoping to get an injunction in court to prevent further damage and destruction to the land. You can help their cause at the GoFundMe link:
https://www.gofundme.com/f/save-djaki-kundu-also-calledthe-039gympie-pyramid039

You can follow the Kabi Tribe’s and their advocates and supporters’ efforts to protect Djaki Kundu through the Facebook group: https://www.facebook.com/Kabi.Dreaming/

The Kabi tribe is one of over 150 tribes which has a treaty with The Original Sovereign Tribal Federation. The OSTF identify as survival freedom fighters, determined to work with non-Tribal Nations Australian brothers and sisters toward future not controlled and dictated by greedy corrupt corporate governments, but a government that represents the living people, and respects native animals and resources of our land that we share. Witt-boooka highly recommends their videos to watch on their website. They also have membership options:
https://originalsovereigntribalfederation.com