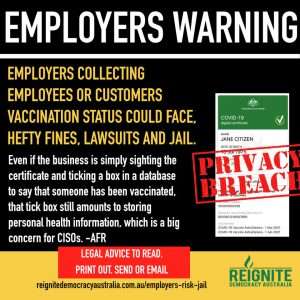 Collecting COVID-19 vaccination certificates from customers or employees poses a serious legal and cyber security risk to businesses that expose them to lawsuits, hefty fines and even executive jail sentences if the data isn’t handled properly, experts warn.

The risk is so grave that businesses that have already stored images of government-issued vaccination certificates from employees or customers are advised to scour their email or human resource systems and delete the images, or at the very least remove a sensitive piece of information prominent on the certificate that exposes businesses to a “world of data security pain”, one expert says.

As part of state and federal requirements for emerging out of the pandemic lockdown, businesses are asked to check whether customers and employees are vaccinated before allowing them to enter their premises.

Businesses storing information about whether someone has been vaccinated are therefore storing health information, quite possibly for the first time, exposing them to the Privacy Act, which requires they take “reasonable steps” to secure that information, said Anna Johnston, a former NSW deputy privacy commissioner who runs her own data privacy consultancy, Salinger Privacy.

Worse than that, the federal government certificates contain a unique identifier, known as the Individual Health Identifier (IHI), that is covered by its own law, with much stricter data security requirements and with punishments that could include jail if that one piece of data is mishandled, Ms Johnston told The Australian Financial Review.

If you have provided your vaccination status already, please request that your employer prove how they are keeping your medical records private and that you want a written response as to the measures they have taken to protect your private medical records. There are severe penalties for those businesses that do not comply.

If you are in the future asked about providing further medical records please read this document as you are not required by the Privacy Laws to provide that to anyone. This is your medical privacy and you have rights! 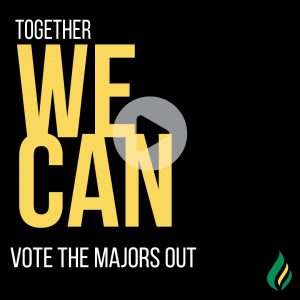 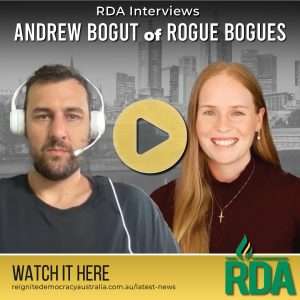 Where have the sports stars and celebrities been during the COVID crisis? They’ve been taking money to peddle the same narrative as the mainstream media

Monica interviews a Portuguese judge who got fired recently

Dr Rui Castro is a lawyer and was most recently a judge in Portugal. He was fired for asking witnesses to take their masks off

Facebook wants RDA gone – 3 pages taken down with no warning

Don’t worry. We don’t need them 🙂 We have RDAsocial and soon we’ll be live streaming direct to the website. We knew this day would