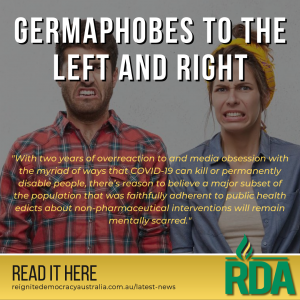 Germaphobes to the Left and Right

With the SARS-CoV-2 pandemic hopefully waning, it will be time for many to take a step back and assess the collateral damage. And there is, and is going to be, a lot of it.

With two years of overreaction to and media obsession with the myriad of ways that COVID-19 can kill or permanently disable people, there’s reason to believe a major subset of the population that was faithfully adherent to public health edicts about non-pharmaceutical interventions will remain mentally scarred. Some might not be able to shake themselves out of the nascent germophobia that wasn’t just encouraged, but mandated. Good thing that a manual for post-pandemic germophobia is on the way. But it’s not just me; others are voicing concern as well. The media did a heckuva job scaring the hell out of people, and someone has got to clean up the mess.

People haven’t become less vulnerable to germophobia after major improvements in sanitation and antimicrobial therapies of the last century. In fact, as death from infectious diseases have become more rare, our fear seems to have increased, and this fear can and has result in a lot of collateral damage, including an unnecessary burden on healthcare facilities. In 2019, Steven Taylor, author of The Psychology of Pandemics, explained:

Fear of an impending pandemic can precede any actual pandemic and may have to be dealt with in addition to managing the pandemic itself.  The surge of patients on hospitals can occur even when an outbreak is only a rumor.

This happened during the 2009 swine flu pandemic:

At a time when there was a heightened public concern about influenza but little disease prevalence in Utah, emergency room departments experienced substantial surges in patient volumes, with the volumes comparable to the increases experience when the disease finally reached the state. Most of the surge was due to pediatric visits. Young children frequently contract diseases with flu-like features (e.g., fever, cough congestion), which were likely misinterpreted by their parents as possible signs of swine flu.

But that was influenza. With COVID-19 shutdowns emergency room admissions tanked, even for necessary conditions like heart attacks, because people were so irrationally terrified they refused to seek critical care. For months during the pandemic, the hold line of my local hospital featured a doctor who implored people to seek care if they had signs of a heart attack, “The potential for permanent damage is much greater from a heart attack than from the coronavirus.” Just because people weren’t going to the hospital for heart attacks, doesn’t mean they weren’t having them. They were just dying at home, or suffering permanent damage.

Once infected with irrational fear, people will exhibit irrational behaviors, all due to a warped perception of risk. From The Psychology of Pandemics:

People may go to great lengths to “decontaminate” perceived sources of infection or to remove perceived contaminants from themselves. This may involve behaviors that are more extreme than mere handwashing. During the SARS outbreak, one woman in Beijing microwaved banknotes that she had acquired form a bank, fearing that the notes were infected. The outcome was predictable; the money burst into flames and was incinerated. For example, some people have been getting vaccinated twice in one flu season.

Everyone has by now seen many examples of this first hand. During my walks, I’d see a couple cross the street thirty yards ahead of me on the sidewalk, just to give me “social distance”. Others would meticulously wash or even bleach their groceries. I saw a guy riding a motorcycle without a helmet wearing a mask. That’s some seriously deficient risk analysis.

The fear of contagion during a pandemic can become so great, that people begin to lose their own humanity. Communities break apart. Sick or vulnerable people are abandoned, shunned, or neglected. Pets or other animals that could be sources of infection are abandoned, abused, or destroyed, and foreigners and other outgroups may be blamed, marginalized, and even persecuted. All of this can and has happened, especially during the current pandemic.

These examples of disease avoidance are based on natural impulses. Just like the cellular and molecular immune system studied by immunologists like me, some psychologists study the behavioral immune system (BIS). Instead of cells and molecules that attack foreign invaders, the BIS concept focuses on what motivates people to avoid infectious diseases, with the main factors being perceived vulnerability to disease and disgust sensitivity, and how their behavior is affected. When you see or smell rotting meat or a stranger that looks ill, your BIS kicks in and tells you to avoid them. In this way, the physical immune system is complemented by the psychological one, that hopefully keeps our exposure to deadly contagions to a minimum.

Researchers have shown that people are pretty adept at making judgements of others, not just on visual cues, but also based on scent. Individuals have different scents that are associated with genes of the adaptive immune response, particularly the major histocompatibility complex, or MHC. MHC genes are important for determining our adaptive immune response to just about anything, and the ability of humans to detect MHC differences in scent might be an evolved mechanism for determining genetic compatibility. Women who rated the attractiveness of a scent based on T-shirts worn by men tended to rate scents associated with particular set of MHC genes as more or less attractive, without even having seen the men that wore them!

People can also sense others who are infected using their sense of smell. This is true for not just infection, but even mere signs of one; a study where only a small amount of the immune-stimulating bacterial cell wall component LPS was injected into volunteers resulted in their T-shirts being rated more unpleasant than shirts from a control group. Again, the raters didn’t even see the injected subjects, who weren’t really infected—yet their bodies had received a strong signal of infection that was enough to change their odor, signaling their potential infection to others.

Infection and our immune responses to it aren’t just sensed by others—those doing the sensing also experience physiological reactions to disgust cues, even if conveyed in the form of harmless images, with some being powerful enough to cause an increase in body temperature and increased sensitivity to pain. Furthermore, increases in fever-inducing inflammatory cytokines (i.e. intercellular signaling molecules of the immune system) are also associated with decreased social behavior in mice—which makes sense—as not only do individuals not want to be around others that are infected, most people who are sick just want to be left alone. All of these cues and our responses to them are facets of a normal behavioral immune response.

However, in a germophobe, the BIS goes too far. Germophobes may believe themselves to be highly vulnerable to severe disease, even if they are relatively healthy and in reality carry a low risk. Any adverse bodily sensation may be interpreted as an early sign of infection, and result in maladaptive behaviors like excessive hand washing or constantly seeking confirmation of their perceived infection through repeated testing and doctor visits, and then citing any concern shared by their doctor as validation of their own fears. They become anxious and intolerant of uncertainty, and may see signs of contagion where others would not, in schools or events, even those that occur in low-risk areas (e.g. outdoors). The result of these delusions are maladaptive behaviors that are completely out of line with the individual’s own risk, often causing harm, not only to the germophobe, but also to those around them. These irrational fears, and a desire to control them with false assurances, can in part explain how children were treated the last few years, and how blanket mask mandates were rationalized even in the absence of prior scientific consensus.

The Politics of Disgust

In addition to perceived vulnerability to disease, the second major factor of the behavioral immune system is disgust sensitivity. Some researchers believe there are universal cues that incite disgust in the majority of people, regardless of geography or genetic makeup. Bodily wastes, gore, spoiled or unfamiliar foods or certain animals are considered universal disgust cues. Objects that resemble others in these categories may also incite disgust, even if individuals are aware they are being tricked (for example, fudge resembling dog feces, or being asked to eat out of a new and perfectly clean toilet). During the swine flu pandemic of 2009, people who scored highly on tests of disgust sensitivity were likely to have a heightened sense of vulnerability to infection. Thus, researchers can predict where people fall on the germophobe spectrum by how strongly and consistently they exhibit disgust in response to smells, objects, or pictures.

Women tend to score higher on disgust tests than men, and this is likely due to the chance of passing a disease to their child in utero; women are especially sensitive following ovulation and during the first trimester of pregnancy. It’s easy for most to recall a pregnant woman who spent a good chunk of her first trimester feeling absolutely awful—this is part of a natural mechanism for protecting both the mother and the baby from infection. Her condition is also a result of a dampened immune response, which protects the developing fetus from immune attack. After all, the fetus contains MHC genes from the father as well as the mother—it’s basically a transplanted tissue that the mother’s immune system needs to learn to accept. And that can result in feeling awful and an increased sensitivity to certain smells and foods.

Germaphobes to the Left and Right