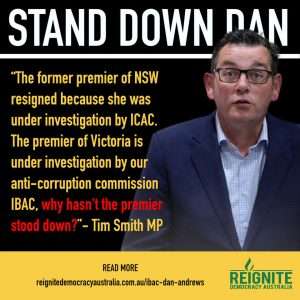 Victoria’s anti-corruption body has been examining the conduct of Premier Daniel Andrews and a senior public servant over their role in controversial deals that benefited the firefighters’ union and its boss, Peter Marshall.

While it has been known since 2019 that the Independent Broad-based Anti-Corruption Commission (IBAC) has been investigating dealings involving the United Firefighters Union (UFU), the fact that its investigators have been scrutinising the Premier’s conduct has not before been confirmed.

Sources with knowledge of the investigation who are not authorised to comment publicly have confirmed that one aspect of the IBAC investigation involved scrutiny of the Premier’s actions.