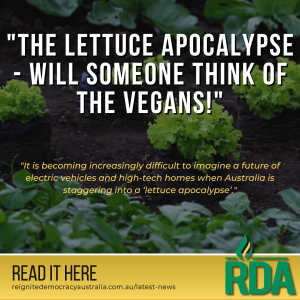 ‘The Lettuce Apocalypse – Will Someone Think of the Vegans!’

A lettuce crisis!? Who would have thought – actually, a food crisis does not seem crazy for us ‘conspiracy theorists’, but lettuce really? People have been crying out about the government and other bodies destroying food all for control over pricing… and more.

The following article from Spectator Australia:

It is becoming increasingly difficult to imagine a future of electric vehicles and high-tech homes when Australia is staggering into a ‘lettuce apocalypse’.

Basic fresh vegetable supplies are running short this week, with lettuce in particular nowhere to be seen. Fast food giant KFC made global news when it decided to ditch lettuce entirely and replace it with shredded cabbage. Sure, it looks similar, but the bitterness of an empire in decline can certainly be tasted.

New Prime Minister Anthony Albanese called the situation ‘crazy’ – although it was said with a laugh.

‘This is a crisis. My son loves KFC and when he hears about this he is going to be devastated. It’s extreme. Cabbage isn’t the same as lettuce. That’s just wrong. I’ll put it on the list for the Cabinet meeting today. Cabbage-gate.’

The Prime Minister had to laugh it off, because it is difficult to accept the reality that Australia can’t keep a steady supply of rabbit food on the shelf right when politicians are telling us to ‘go Vegan’ and give up meat.

If you can find lettuce, it’s upwards of $10 – with farmers saying there’s no end in sight.

The lettuce crisis is down to so-called global warming in Queensland. It rained too much earlier in the year and now it’s too cold to plant another crop. If ‘wet and cold’ doesn’t sound like the ‘sky is on fire’ end times you were promised, well, stop being so racist…

‘The really concerning thing about this is that we’ve got these high-pressure systems coming through as we head into Winter, and we’re going to see really low temperatures. We’ve got ground that’s wet and cold. Crops just aren’t going to grow in these conditions,’ said Joseph, managing director of Alfred E. Chave.

Successive Liberal and Labor governments have made it expensive and difficult for farmers to operate, reducing the overall diversity within Australia’s farming capacity. This means that when the February flood was followed by a second downpour right before the cold Winter weather set in, the lettuce (and other fresh food supply) chain was interrupted.

Previously, the chain would divert into smaller operators to fill demand, but thanks to ‘green politics’, those micro farmers don’t exist. By creating large, efficient farms, we have endangered the overall system.

At the same time, Queensland has been allowing solar farms to litter its productive agricultural land on the Darling Downs – carpeting what were previously high-producing farms. The solar panels themselves cause excess runoff and create heat islands, leading to soil erosion for neighbouring owners.

‘We’re at least getting double what we normally would get [for lettuce], but we need our prices to go up now because all our commodities have gone up. There have been big price [increases] in fertilisers, fuel, and even just packaging costs are going up to 70 cents per unit,’ said one farmer, to the ABC.

It’s a pretty sorry state of affairs if Australia’s shelves start emptying of fresh vegetables while the cost of living crisis puts lettuce – of all things – out of reach for many families. Wholesale supply of lettuce is down by 80 per cent, so prices are expected to remain high for the foreseeable future.

‘No one is really benefiting [from the high prices], that’s the honest truth. Prices are strong, and some [farms have] potentially high prices, but their volumes are down, and there’s also a lot of farms that missed out on [crops] totally,’ said chair of the NSW Chamber of Fresh Produce, Carlo Trimboli.

Will someone please think of the Vegans?

'The Lettuce Apocalypse - Will Someone Think of the Vegans!'