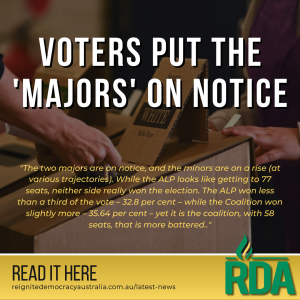 Voters Put the ‘Majors’ On Notice

In this federal election, the Coalition and the freedom parties – Liberal Democrats, One Nation, and United Australia Party – appear to have failed against the ‘free things’ parties of Labor, the Teals, and Greens.

Look deeper. It is more complex than this.

The two majors are on notice, and the minors are on a rise (at various trajectories). While the ALP looks like getting to 77 seats, neither side really won the election. The ALP won less than a third of the vote – 32.8 per cent – while the Coalition won slightly more – 35.64 per cent – yet it is the coalition, with 58 seats, that is more battered.

This is because the Labor Party’s two minor party allies, the Teals and the Greens, are more disciplined with their preferences than those of the Liberal Party, and they were capable of taking seats in their own right, unlike UAP, ON, and LDP. These minor parties also partly explain the low vote for the majors as they spent a lot of the election campaign running their own side down.

The Teals paint themselves as independents who want to fix the climate and reform political integrity, but when it comes to finance, they are every bit as much an example of money politics as Clive Palmer’s United Australia Party – except with the chutzpah to deny it.

They have no real policy platform, or genuine democratic participation (even though they brand themselves as ‘Voices of [insert your seat here]’). It is a type of politics less democratic than your local footy club, but comes with plenty of enthusiastic fans.

Teals are also significantly more successful than Palmer. While he apparently spent $100 million of his own money for no seats, Holmes à Court aimed to spend significantly less but won six seats.

Since the 70s, politics has become increasingly corporatised. Before then, parties were broad-based and member-based. Policy and tactics were largely determined by the amateurs who made up the membership. The candidates were often recruited from the broader community. Over time, this has changed. Now candidates and elected members are more likely to be full-time professionals in politics before being preselected, while policy and tactics are dictated by political mercenaries who specialise in running campaigns.

As a result, both the major parties have become divorced from their communities, the standard of candidate has deteriorated, and strategies and policies have tended to converge. This also partly explains their record low result at this election.

The Teals take that trend to a whole new level, but in a way that differentiates their product and allows them to steal market share by appearing fresher and more aligned with their ‘community’.

Judging from the Warringah template of 2019, they first perform detailed psycho-demographic profiles of all the seats, identify where there is a mismatch between the seat and the current incumbent coupled with a receptiveness to the ideas they want to put forward. They prioritise their potential markets against likely resources and select a number. Then, they determine a strategy. Only at this stage do they go looking for a product, sorry candidate, to sell.

Every campaign is run like a start-up business. Identify and analyse the market, conceptualise the product, find distributors, and then, and only then, manufacture it and sell it.

The difference between the major parties and the Teals is a bit like the difference between Coles, Woollies, or Aldi on one hand and the independent IGA on the other. To the shopper, they all look like supermarket chains. Sure, IGA enjoys more autonomy than the local Woollies, but the threat of losing that head office support must be a significant curb on what they can and can’t do.

This arrangement has allowed the Teals to appear to community-based in a way the major parties don’t. It also allows them to retail niche messages to niche markets which is impossible for a party that wants to win more than 50 per cent plus of the seats. So while Teals had nothing to add to the major conversation, simply repeating that they wanted to fight Climate Change and corruption was enough to see them grab up to 63 per cent of the Labor vote, 72 per cent of the Greens vote, as well as up to 26 per cent of the Liberal vote in erstwhile safe Liberal seats in Sydney and Melbourne.

The majors were wedged. Most electors weren’t interested in Climate Change, and preferred to talk about the cost of living. This didn’t matter because Teals were in wealthy seats where privation is driving a Toyota rather than a Tesla and this wasn’t an issue.

This is a model of politicking that can be re-badged and moved into other seats. Roy Morgan, who do the sort of psycho-demographic profiling I was referring to, are predicting that they will. (Their analysis of the Teal phenomenon is interesting, but obviously conflicted). The other parties undoubtedly will respond. They may do that by copying elements of the model or they may democratise themselves, perhaps running community-wide plebiscites and giving more power to individual candidates, like American parties do.

It also demonstrates that no party ‘owns’ its voters, and that Labor and Greens voters may even be less loyal than Liberal ones. Social scientist Jonathan Haidt thinks we are living in a time of a new Tower of Babel. He blames social media, and while I have problems with some of his thesis, I think he is right when he diagnoses the problem as us all talking past each other using different ‘languages’ without a common narrative.

This was certainly a problem for both sides in this last election, but not so much the lack of a common narrative, but rather the lack of any narrative. During his term in government, Morrison wasn’t prepared to argue for climate realism, civil liberties, empiricism, or economic responsibility. He didn’t legislate against religious discrimination, he didn’t legislate against vaccine mandates, the new National Curriculum is as bad as the last two drafts, he spent like the proverbial dipsomaniac mariner, and he signed up to Net Zero by 2050. The nomination of Katherine Deves in Warringah was a slippery attempt to stake a position on biological sex without actually having one.

Labor, for their part, had no clear distinction from the government and ran a largely personality-based campaign against Morrison. Their plan appeared to be to outbid the government on limited issues by modest amounts.

When you don’t present the electorate with clear choices then they tend to vote purely according to demographic interest. The most successful poll in predicting individual seats was the YouGov poll which interviewed 19,000 Australians, analysed them by demographic, and then used that analysis to infer the results in each federal electorate. That kind of modelling only works well if people are driven by their class rather than ideology.

Voters Put the 'Majors' On Notice