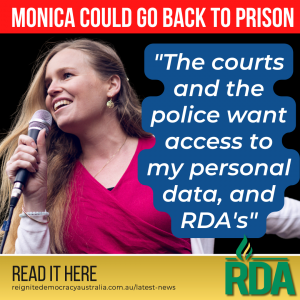 Monica could go back to prison – update on her case

I have lost a significant court battle this morning with huge ramifications…here’s the story. If you don’t like reading, there’s a video at the bottom.

I’ve been dealing with a dark cloud over my head for almost three months, unable to inform you about any of it. I couldn’t tell you because I didn’t want anyone to think their personal data was at risk, because it’s not! I will do everything in my power to uphold my integrity and RDA’s data privacy.

Before you read this, rest assured, your data and communications are safe with RDA!

On 1st March, I received a warrant from Victoria Police that had been granted by a magistrate, John O’Callaghan. This warrant seeks to force me to give numerous passwords over to police giving them access to several private, and RDA accounts, held on my phone. See below.

Can you believe the long list of applications they want access to? Police would have access to privileged legal and medical communication within those apps which breaches my privacy is so many unethical ways. I am not a murderer, drug trafficker, or terrorist, I’m a human rights activist and journalist in the once free country of Australia. Keep in mind my alleged crime is encouraging people to express themselves through protesting. In court, they refer to events like this as ‘illegal’. How a democratic country can deem any gathering illegal is beyond comprehension. How does a virus, no matter how severe, enable the government and police to suspend the human right to gather and then criminally charge those who allegedly organised them?

Giving up these passwords would not only be a breach of my own privacy, but it would also give police access to sections of my database (giving them a list of political opposition) and private communications between myself and others who trust me and RDA. If I fail to comply, it’s not to protect my own data, I actually have nothing to hide…it’s to protect the data and communications of the RDA audience and staff. It would destroy the organisation I’ve built, Reignite Democracy Australia, because no one would ever want to email us again. They’d be rightfully concerned that their communication could be intercepted by police. If I were a terrorist or mass murderer, access to all my communications for a criminal investigation would not be overreaching, but I’m none of those things. I know it, you know it, and so do they!

We raised over $300,000 for this battle because the people wanted me to fight this till the end…so I intend to fight until every cent is spent, and more if need be.

In case you don’t know the back story to this, on 30th August 2021, I was arrested and given draconian bail conditions which I refused to sign and spent 22 days in solitary confinement. I then appealed the bail conditions and had the vast majority of them revoked.

On 2nd February 2022, I pled not guilty to the incitement charges and am awaiting a trial by jury. My legal team advised me to consider pleading guilty to certain charges if others are withdrawn, pay the fine(s), and be done with it. That would be the easiest option for me, but then there is no way of me setting a precedent to ensure no one else has to go through this again. Someone needs to take a matter like this all the way…that person may as well be me. We need a precedent to protect people like me in the future. In saying that, without the legal fund, I would have been forced to plead guilty. Thank you, from the bottom of my heart for all those who donated to the fund. Without you, this fight would have been lost many months ago.

When I received the warrant for access to all this data, I knew straight away I had to fight it. On April 6th, 2022. I put in an application to the supreme court to have the new warrant, as made by the magistrate revoked.

I spent $80,000 of the fund to fight this warrant, with the terrible prospect of having to pay the costs of the prosecution as well, which will completely drain the entire fund leaving me with nothing left for the actual trial.

During the lunch break, my legal team advised me that my prospect of winning was low and that I should withdraw the application immediately. The prosecution offered to waive any costs incurred, which could be over $100,000. That would be on top of the $80,000 already spent.

My legal team argued that getting access to all these accounts is far too onerous and excessive based on the crimes I’ve been charged with. Even if incitement is proven, it is incitement to a summary offence that only carries a fine. The crime itself is not severe enough to allow such an intrusive warrant.

When the prosecution. Elizabeth Ruddle SC, had their time to rebut our arguments, she argued that my crime is indeed severe as it was encouraging people to contravene health orders put in place to protect the community.

Then he mentioned the fact I am a journalist, or at least claim to be, and asked her to explain why he shouldn’t take that into account.

This was the only positive moment of that day. It seems to me that the judge understood the hypocrisy to how a lockdown protester is dealt with compared to a BLM protester. There were restrictions in place during the BLM protest in 2020, but not one organiser is being dragged through the courts like I am. Justice Beale seemed to recognise this and offered me a sliver of hope with that comment.

That sliver of hope has been squashed this morning, the warrant stands, and I’ve been given 28 days to either appeal or comply. The total cost for me to challenge this warrant is now $180,000 or more which includes paying the Crown’s costs. The crazy thing is, I think Beale wanted to rule in my favour but the pressure must have been immense. He seemed to overlook the human rights charter which gives all Australians the freedom of movement and speech. If you’re interested in his full judgement explanation, you can read that HERE. The juicy bits are near the end.

If I don’t comply with the warrant, I could face up to 5 years in prison and would be breaking my current bail conditions which will land me back in prison for up to 3 months.

What are my options?

None of these options are good ones. However, I have God on my side, I have the support of thousands of people around Australia and the world. I’m going to follow my heart and do whatever is needed to stand up for the right to privacy, to gather, to protest, to speak and to be free.

There have been others before me charged with incitement. Most have pled guilty, gotten no criminal conviction, and just paid a fine…but no precedent has been achieved. Topher Field is the only person I know of who is still fighting his charges.

This battle is far from over, in the broader sense. There will be more lockdowns at some point, whether it’s a pandemic or climate change. They’ve tested the population’s compliance to tyranny, and they know it works. Whether it’s me, or someone else, this fight needs to be had.

Check out this article from May 25h. Andrews government moves to jail native forest logging protesters. The Victorian Government seem to want all protesting deemed illegal…someone has to stand up to them!

It is even clearer to me now that this country is in a tailspin to disaster when someone like me is being dragged though prison, numerous courts and police attempting to access all my private data, and the data of others.

A country that forces a woman like me into a corner where jail, or a guilty plea under duress is her only option to protect her privacy and others…is a country in distress.

The RDA team will continue to work no matter what happens to me. If you know some wealthy people who want this fight to continue, please ask them to help me fund the next leg of this fight. This is what the police do to people…they drain all their resources so they can’t continue to fight. Whether they are guilty or not, they are forced to make decisions that go against their integrity. This disables our chances of precedents being made. Our justice system is a mess to say the least.

Without funds, I will have to either; plead guilty under duress, break my bail and go to prison, or represent myself…all of which are bad options. If we don’t get the funds we need, then I’ll know the will of the people is not for me to continue fighting, which I’m open to accepting.

If I plead guilty, know that it will be my very last option and that I don’t think I am guilty of anything, except empowering others to stand up for themselves. If that is a crime, then I’m guilty of that.

Please pray for me, and if prison is my only option, please continue the fight in my absence knowing that I have the fortitude to remain positive no matter what.

Love to all my RDA family and broader community. It’s been a pleasure to fight alongside such amazing and passionate people. Victory was never going to be quick or easy. We will lose some battles along the way, but we won’t lose the war! Stay hopeful because every day that goes by, is one day closer to our victory for FREEDOM.

If you want to support me continuing the fight, you can do so HERE.

Monica could go back to prison - update on her case