RDA media release – Mandated Jabs are not ‘Vaccines’ according to TGA’s own website.

RDA sent this media release to numerous media outlets – no one cares! One even responded and said “thanks but we can’t use this”

The TGA themselves responded to this, see below;

“Provisional registration (also known as provisional approval) is initially granted for two years with two extensions possible up to a maximum of six years.
In the case of COVID-19 vaccines, provisional registration has been granted on the basis of short-term efficacy and safety data. In order to transition to full registration, sponsors are required to submit longer-term data, for example, on duration of protection.
Timing will ultimately depend on when these results are available and are submitted by sponsors.”

Note the highlighted section. THESE VACCINES ARE NOT FULLY APPROVED!!!

Here is our media release, below is a downloadable version.

The inoculations being forced on Victorian workers by the Andrews government are not vaccines, according to the Therapeutic Goods Administration’s definition. They are a risky gene therapy that World Health Organisation data shows have so far produced over 24 million adverse events and thousands of TYPES of adverse events.

What is being imposed on Australians is not just an unethical measure that forces workers to choose between their health and their livelihood. It does not even meet the TGA’s own definition of a vaccine. It represents a failure by the TGA to adhere to basic standards of professionalism and scientific principles.

This is a pattern. For example, between March and September of 2020 the TGA admitted on its web site that it did not know what a positive PCR test for Covid-19 actually meant, acknowledging that the: “infective state of the individual is yet to be determined.” Yet it allowed this poor, and probably false, data to be used as the basis for the lockdown policies.

Now it is repeating the sloppiness with the vaccines. Here is what the TGA has on its website:

“Vaccines are medicines that protect you against specific diseases, such as measles, influenza (flu) or whooping cough. Vaccines can contain:

To date there are two types of inoculations approved in Australia: mRNA (Pfizer and Moderna) and adenovirus, or viral vector (Astra Zeneca). Both are a type of gene therapy. In the case of the mRNA jabs, according to the Department of Health’s website, they use “a fragment of messenger RNA (mRNA) to instruct your body to make an immune response against COVID-19.”

These vaccines do not meet the definition of ‘dead’, ‘severely weakened’, or ‘small, purified components’ of viruses or bacteria. As the TGA acknowledged in Senate hearings, they are gene manipulations that makes the body create trillions of spike proteins that then accumulate everywhere, including the major organs.

There is also a failure to adhere to the basics of research and information gathering. Australian governments are lying when they reassure the public that the gene inoculations are safe. To state the obvious, in order to determine safety in the medium or long term it is necessary to wait to see the effects in the medium and long term. Usually that takes about 6-10 years.

Not even the governments pushing these mandates would claim that six years can be compressed into six months.

Yet despite this, the medical authorities are telling Australians the vaccines are definitely safe. The TGA itself has listed over 60,000 adverse events.

There has been a collapse of sound medical practice in Australia. Normal risk-benefit analyses and simple checking have not been applied. Worse, the frenzied efforts to get people ‘vaccinated’ are supposedly based on the false belief that it will stop infection and transmission of the virus. It will not. The pharmaceutical companies never claimed that in the first place.

The vaccine mandates are forcing on the Australian people an experimental drug that is only provisionally approved. The longer-term consequences could be disastrous. The TGA is supposed to be part of Australia’s public service. Instead, it has become complicit in an attack on the public.

READ THE FULL ARTICLE HERE There is a big push by our governments to medicate all Australians with a covid-19 injection, still in clinical trial. 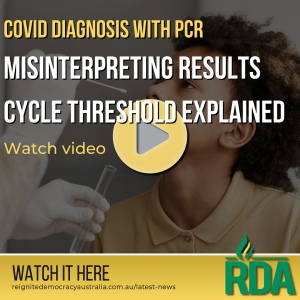 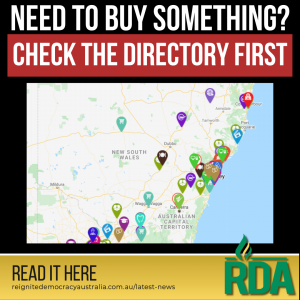 RDA business directory NSW is waiting for your support

We’ve heard amazing stories from these businesses. Not only are they being supported by our audience but they’re also meeting great people and having wonderful 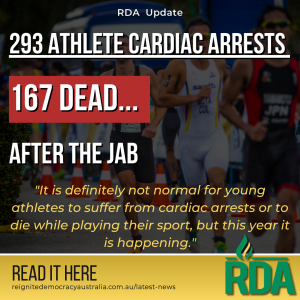 RDA media release - Mandated Jabs are not ‘Vaccines’ according to TGA’s own website.