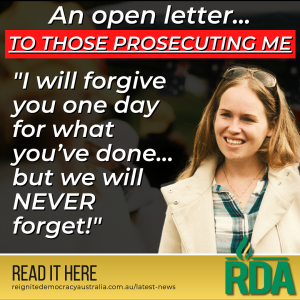 An open letter – TO THOSE PROSECUTING ME 

If you don’t know the full story, READ IT HERE. If you want to support my fight financially, CLICK HERE.

Whoever is behind this ‘malicious prosecution’ should be ashamed of themselves! Putting an innocent girl like me through this is pure EVIL and your conscience will remind you of this for years to come. I don’t care whose orders you’re following or how big your paycheck is…you disgust me and millions of people around the world who are watching this unfold.

You are participating in a ridiculous fishing expedition trying to criminalise human rights activism and scare people into submission. You are inadvertently trying to set precedents that will not only ruin your own freedom and prosperity but also your children’s and grandchildren’s. You are part of the problem in this country because you are willing to put someone like me under the bus for your own selfish gain. You will be remembered as a soulless, selfish…. coward. Whereas people like me, and those who support me, will be remembered for standing up against tyranny and holding our ground even when the odds were against us.

We can sleep peacefully at night; I wonder if you can.

You have already spent hundreds of thousands of taxpayer’s money trying to corner me into submission. You are prosecuting a woman with no criminal record who has given up the last two years of her life fighting for YOUR rights and the rights of your fellow Australians.

You have used so many resources trying to break people like me, midnight visits to my family home, surveillance, legal costs, administration, and more. If only you spent this much time on pedophiles, family violence, and child abuse…cases that actually prevent people from being harmed. Instead, you’re using your skills and resources to do the bidding of the government and help them squash political opposition. How proud you must be!

You might think that it’s not your fault, or it’s just your job so there won’t be any ramifications, you’re wrong! Your conscience will never forget, Karma and God won’t either.

RDA has thousands of local supporters and many international ones. They are all following this story in disgust…not at me, but at YOU! Every legal practitioner I’ve spoken to says they’re sickened by the waste of police and government resources and that I’m being treated worse than some murderers and rapists they’ve represented.

Whether I get justice, or God does it on my behalf…you can never run away from your evil ways. You could, however, make amends and choose to stop. You could refuse to continue the case, you could drop the charges, you could save yourselves the embarrassment and walk away. Your names are written on all the court documents and paperwork, everyone knows who you are and what you’ve done. We’ve all been let down by people like you, people who are meant to serve and protect us.

Imagine joining the police force, or legal profession, with the intention to serve and protect the people, but instead, you’re prosecuting an innocent activist because the government told you to. It must be quite humiliating. I don’t envy your position.

Is it worth selling your soul for a paycheck?

This case will come and go, I will move on from this, but your soul will always be stained.

If I don’t comply with your warrant, it’s ANOTHER criminal charge for me. It’s a whole new court proceeding and it’s a more serious crime than the original charge that you’re trying to get more evidence for.

If I plead guilty to the original charge, I would pay a $21,000 fine and it would be over. I’ve already spent 22 days in prison and now I’m fighting for the data privacy of my database. All of this because I allegedly encouraged people to exercise their human right to gather and protest. Read that paragraph again and let it sink in! Do you want to live in a country where protesting is a criminal offense? If you do, you’re doing the right thing by prosecuting me. If you don’t, then you should stop!

If I don’t comply with the warrant, it’s a breach of bail and could land me back in prison for months or longer. The charge of not complying also carries a maximum of 5 years prison time. Let me remind you again, my original charge only carries a fine…no prison time at all.

I have news for you. I also want to make an example out of you, and I have the support of the people to do it. I have a gift from God that gives me emotional fortitude and faith that everything will work itself out eventually.

I am doing this because I know it’s the right thing to do, can you say the same?

Do you think you’re protecting society by prosecuting me?

Do you think silencing me will help your fellow Australians and children in the future?

Will you be proud to set a precedent that human rights activists should be dragged through the courts?

If you’ve sworn to serve and protect the people, do you think doing this to me is fulfilling that oath?

Are you proud of your involvement in this case?

Do you wonder why the organisers of the BLM protest during lockdowns aren’t going through the courts?

Have you figured out that this case is not about justice or the health and safety of society? It’s about silencing political opposition. WAKE UP!

Do you want to be remembered as the people who prosecuted me?

Whether I’m in prison or bankrupt, my blind faith gives me the strength to face Goliath with my slingshot. My faith is stronger than your desire to squash me.

I have a few days to decide my next course of action.

Of course, this is very stressful for me, I’m not a robot after all. I won’t pretend that this is fun for me, however, it is my duty and I take it very seriously. When someone has genuine conviction and purpose, nothing can stop them. Sure, there are hurdles and stop signs along the way, but eventually good always prevails. So, whatever happens, I will be at peace and will fight till the very end with whatever resources I have.

With God and the people on my side, I will see you in court over and over again until good prevails. Whether you win this battle or not makes no difference to the fact that you’ll be the one with egg on your face. You’ll be the one who maliciously prosecuted an innocent woman trying to stand up for the rights of our fellow Australians. You’ll be the one left having to explain to yourself and others why you abused the legal and criminal system to attack a woman like me.

Win or lose…I’m at peace and I pity you.

An open letter – TO THOSE PROSECUTING ME