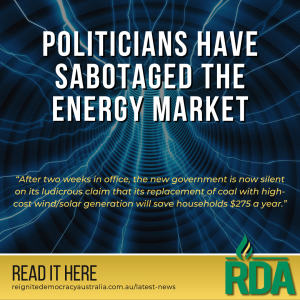 Politicians Have Sabotaged the Energy Market

‘After a decade of denial and delay, Australia deserves a better future – one with cheaper power, more jobs, and less emissions,’ said Energy Minister Chris Bowen, in his last media release prior to gaining government.

Mr Bowen advocated replacing coal generators with wind and solar, with their shares of electricity supply to increase from 30 per cent to 82 per cent by 2030. To facilitate this, he proposed spending $80 billion on transmission, thereby quadrupling its present costs.

He also ridiculed a Morrison government that ‘does not believe renewables are the cheapest form of energy, or that the world’s climate emergency is Australia’s jobs opportunity’.

Following the May election – the ALP, along with Greens and Teals – received all their Christmas presents at once with an energy supply shortage where a third of the coal generators were out of action, bringing an eight-fold increase in wholesale prices.

After two weeks in office, the new government is now silent on its ludicrous claim that its replacement of coal with high-cost wind/solar generation will save households $275 a year.

The June 8 meeting of energy ministers endorsed the transmission part of the ALP plan only to see this undermined the very next day with the announcement of delays in a crucial element – the conversion of the Snowy Hydro system into a renewables-supportive pumped hydro facility.

Panicked by the tenfold increase in electricity prices, the energy ministers announced measures to patch up the wounds in the market caused by the very political controls they were amplifying. These included giving regulators powers to trade gas, with no consideration of the effects of this on other suppliers’ actions.

Energy ministers also announced replacing the existing ‘energy only’ market with a UK-style ‘capacity market’. Such a system ostensibly offers more funding to controllable supplies like those from coal, gas, and hydro. But it is less effective and more expensive than having decisions on supply reliability made by retailers who need to balance contracts between many different sources. Western Australia operates with a ‘capacity market’ and it has added costs without improving availability.

The recent bankruptcy of half of the UK’s energy retailers demonstrates that a capacity market does not give greater security.

Fundamental harm has been done to the energy system as a result of politicians meddling in commercial matters. The creation of the National Electricity Market and privatisations two decades ago has brought to Australia the world’s most efficient, lowest-cost electricity supply.

There are two reasons why it has since gone pear-shaped.

First, governments have subsidised wind and solar, making coal and gas generators unprofitable and forcing their closure. Governments made it clear that coal generators, which supply 60-70 per cent of our electricity, have a very limited social license to operate. They inhibited access to new coal supplies, accepted activists’ attacks on coal, and closed their eyes to policies of banks that refused loans and of insurance companies that refused cover.

Secondly, governments have foreclosed exploration and development of abundantly available gas in South Australia, Victoria, and New South Wales. Astonishingly, in face of consequent shortages, the Victorian energy minister, Lily D’Ambrosio, advocated diverting Queensland gas to Victoria. In response to criticism of this policy, Premier Daniel Andrews suggested it was only possible for Victoria to supply gas if we ‘frack up the joint’ which he claims (contrary to all the evidence) will harm our prime agricultural land. The state Liberal Party shares the same policy to the great detriment of the people the politicians supposedly represent.

The industry has been treated as the playground of politicians. They have compounded their own errors in subsidising renewables that undermine the whole system by funding the will-o’-the-wisp (which is hydrogen power) and by appointing activists to bloated regulatory agencies and to their own departments.

Politicians Have Sabotaged the Energy Market