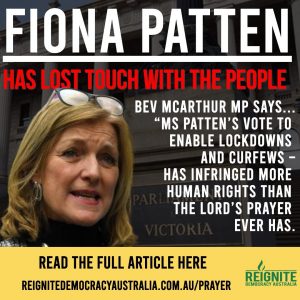 Fiona Patten is so out of touch with the people…

Bev McArthur works really hard to showcase what’s going on in and outside parliament. Her website is top-notch and her emails are great. I received this one today and wanted to share it with you.

We certainly do share the same thoughts on Ms Patten, don’t we…!

For the power and glory, amen

At the very time 12 million Australians including 6.7 million Victorians are in lockdown – many unable to earn an income and businesses closing down for good – the most pressing priority for the Reason Party’s Fiona Patten is to stop the Lord’s Prayer being said at the start of every Parliamentary day.

Member for Western Victoria, Bev McArthur said it shows how out of touch Ms Patten is.

Ms Patten has contacted Members of the Victorian Parliament today advising of her plan to introduce the motion in the Parliament on 4th August, 2021.

Mrs McArthur said it is unbelievable and inconceivable  that after weeks away from the Parliament – and in a lockdown that she personally enabled – the first thing Ms Patten wants to do is stop a prayer.

“Clearly she is aloof and untouched by the pain she has caused.

“If Ms Patten really wants to do something respectful and inclusive, she should do something practical, not ideological.

“If she truly understood the death and destruction caused by stop-start lockdowns and costly restrictions, she could promote a motion to support businesses.  Many will be barely surviving on a prayer right now” Mrs McArthur said.

Mrs McArthur said Ms Patten’s hypocrisy will infuriate a state that is in lockdown – and all because of her vote to extend State of Emergency Powers.

“Ms Patten’s vote to enable lockdowns and curfews – has infringed more human rights than the Lord’s Prayer ever has.

“Even Victorian children’s right to a normal education is denied by the imposition of her views, with schools in the state closed for 121 days since the pandemic began”

Ms Patten’s vote is no doubt being courted by the Premier, Daniel Andrews, to achieve ongoing pandemic controls for the Government – will he support this latest proposal of Ms Patten’s and if so, at what price?

“I smell a rat – in fact several,” said Mrs McArthur.

“I can only think that Ms Patten is trading a tradition of the Westminster system for her own power and influence.  I suspect this is a game of ‘you scratch my back, I’ll scratch yours’.

Mrs McArthur said it is appalling that Ms Patten is pursuing this unnecessary – and far from urgent change – when the state is bleeding losses due to the brutal lockdowns she has enabled.

“This is the same MP who has not only locked Victorians up – but has been the lead proponent of drug injecting rooms.

“While she riles against the imposition of faith on others – she thinks it’s okay to impose drug dealers, syringes, drug-induced violence, theft, and dead people at school gates on the Richmond community.

“She now also wants to impose her drug views on CBD commuters with an injecting room near the Flinders Street Station.

“It’s okay – it seems – to impose her choice on others – a choice that lasts 24 hours of every day for Richmond families and city residents and commuters – and a choice with lifetime impacts on people in lockdown. Some choice!

“The Lord’s Prayer lasts for one minute for a few days of each parliamentary year – impacting a handful of people in a building – who largely reflect the broader make-up of the community.

“Already, MPs can choose to take part in the prayer or not. No one is forcing Ms Patten to listen to it, say it – or even be in the chamber for it. Others can do likewise.”

The last national Census conducted by the Bureau of Statistics showed more than half of the Australian community reported an affiliation with a Christian faith.

“It also pointed to a reduction in the number of Jedis, but perhaps Ms Patten would prefer we pay homage to a galaxy far, far away, than a Christian faith that supports millions of Australians and charitable organisations such as the Salvation Army.”

“Even the Parliamentary kitchen cooks meals for those made hungry by the lockdown – these meals are distributed by the Christian-based Salvation Army.”

A Liberal Party Minority Report produced from the Legislative Council’s Procedure Committee also argued for the prayer to remain.  One of the key arguments touted for keeping it was that it:

“Reflects not only Victoria’s Judeo Christian heritage, but also the principles and traditions of our Westminster parliamentary democracy, including our common law, independent courts, and respect for the rights of each and every individual…”

The motion raises a serious issue of timing given the recent offensive debacle in Western Australia.

“It is incredibly hard not to see this as part of a broader campaign from the left to attack tradition, including religious freedom, and those who don’t agree with them.

“Mark McGowan’s initial refusal to allow the Australian Christian Lobby to hire state venues was done on the sole basis that the ACL didn’t share all the views of the WA Labor Government.

“And just one week later, a Victorian MP is wanting to ban the Lord’s Prayer. It smacks of the same intolerance she claims to be opposing.

Currently, the ACT Parliament in Canberra is the only state or territory in Australia where the Lord’s Prayer is not spoken prior to a Parliamentary sitting.

Ms Patten wants to embed a “…moment of silent prayer or reflection…” in place of the traditional Christian prayer saying the change “…disadvantages no one and makes respectful space for all.”

“If only Ms Patten took that view to her approval for extending State Emergency Powers to 16th December.

“This plan will offend millions of Australians, and Victorians.

“She doesn’t have the Kingdom – but she is certainly chasing the Power and the Glory.

Fiona Patten is so out of touch with the people...