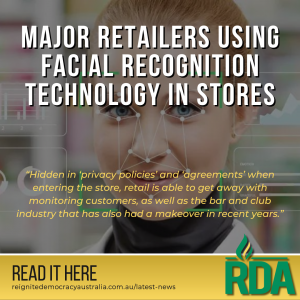 Three more major companies are being referred to the Office of the Australian Information Commissioner over their use of facial recognition technology in stores.

This is the latest revelation for the industry.

CHOICE is referring Kmart, Bunnings and The Good Guys to the Office of the Australian Information Commissioner to investigate potential breaches of the Privacy Act over their use of the technology.

The organisation probed 25 of “Australia’s most-trusted retailers”, and found Kmart, Bunnings and The Good Guys were “capturing the biometric data of their customers“.

CHOICE consumer data advocate, Kate Bower, said the use of facial recognition by The Good Guys, Kmart and Bunnings was “completely inappropriate and unnecessary”.

However, the stores disagree, citing the need for’ protection against theft’ in their stores.

Bunnings’ chief operating officer Simon McDowell has said Bunnings “respectfully disagrees with CHOICE”, with the technology being one of several measures used to keep staff and customers safe.

“Our use is solely for the purpose of preventing threatening situations and theft, which is consistent with the Privacy Act,” he said.

CHOICE also surveyed more than 1,000 customers between March and April this year.

“To make matters worse, we found 76 per cent of Australians aren’t aware that retailers are capturing their unique facial features in this way,” she said.

“Even if that technology was perfectly accurate, and it’s not, but even if it were, it still takes us into the realm of mass surveillance.”

Once again, the stores in question disagree, advising of their use of facial recognition in the privacy policy on their websites, as well as public notices that grant consent.

Kmart, for example, displays small signs at the entrance of stores where the technology is in use:

Once again, the biometric dystopia creeps over the day-to-day operations of Australian retail.

During the pandemic period, it was revealed stores such as Woolworths had now incorporated biometric capabilities into self-service checkouts across the country.

Hidden in ‘privacy policies’ and ‘agreements’ when entering the store, retail is able to get away with monitoring customers, as well as the bar and club industry that has also had a makeover in recent years.

Where is this data going? Who is responsible for the programs?

A few questions that are not told to the ‘consenting’ customer.

Most importantly, this type of advanced technology is not just exclusively found in retail stores.

It has engulfed many elements of Australian society.

A multitude of systems have been developed across a variety of industries and avenues of Australian society to monitor, analyse, judge and identify individuals for ‘safety and security’ reasons.

In Australia, sweeping legislative changes and broad anti-terror laws introduced since 9/11 have sanctioned the rise of unaccounted surveillance methods, including the development of vast biometric capabilities for government and the private sector.

Facial scans taken for passports, driver’s licences or nightclub entry are stored in police and spy agency databases, while new CCTV and smart technology is being developed to monitor all activities.

This includes a significant increase in the use of biometric systems in Australia, including in CBD districts, airports, schools, public transport, supermarkets and more.

Coupled with the Australian government’s “Smart Cities Plan”, which sets out the government’s vision for ‘productive and liveable cities’ that ‘encourage innovation and growth’.

By the end of the decade, networks with highly sophisticated biometric capabilities will connect to a smart city grid where a national facial recognition databases will function as the primary surveillance mechanism.

All just to ‘stop the bad guys’, of course..