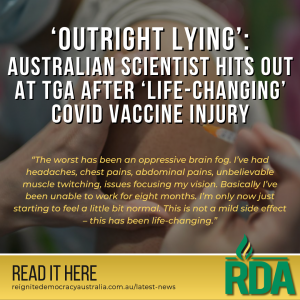 An Australian scientist, left unable to work for eight months after a debilitating neurological reaction he blames on the Covid shot, has likened the treatment of people suffering vaccine injuries to that of returning veterans with health issues after the Vietnam War.

“I’m similar to thousands of Aussies. After the vaccine I had a huge constellation of symptoms from head to toe,” the 46-year-old said, describing it as similar to “mutant long Covid”.

“The worst has been an oppressive brain fog. I’ve had headaches, chest pains, abdominal pains, unbelievable muscle twitching, issues focusing my vision. Basically I’ve been unable to work for eight months. I’m only now just starting to feel a little bit normal. This is not a mild side effect – this has been life-changing.”

Dr Faletic said doctors and specialists were unable to find anything obviously wrong with him.

“You go to the hospital, they take your blood, do an echocardiogram or X-ray or MRI and don’t find anything,” he said. “They say, ‘Well you look fine, go home and rest.’”

He added, “I don’t necessarily blame the doctors. The problem is there hasn’t been a test to find out what’s wrong. I know some people are getting misdiagnosed with anxiety or functional neurological disorder – that’s not what’s going on. It’s a physical injury.”

Dr Faletic, who earned his PhD in hypersonic technology from the ANU and now runs an international research consulting firm based in Canberra, says his faith in the scientific and medical community has been badly shaken by his experience.

He received his first Pfizer dose on October 19 last year and his second on November 9. He had a bad reaction to both “within hours”, but says the second was “dramatically off the charts”.

“I waited a little while [to take the vaccine] – I work with technology and have a science background, so I understood that with a new product, new technology, there could be some things we don’t know about,” he said.

Dr Faletic says it soon became clear to him that the TGA wasn’t interested.

“They’ve said, ‘We can find no safety signals,’ which I think is disingenuous if not outright lying. In my small personal circle I know over a dozen people with different long vax problems, [ranging from] ongoing headaches, memory problems or brain fog to some people who were basically bedridden for months.”

When he went searching for answers, he found “hundreds of people” in online groups who had experienced similar symptoms and submitted reports themselves.

“The TGA still claims there is nothing to see,” he said.

“We are being treated with the same type of derision and condescension as Vietnam vets when they came back damaged. The government doesn’t want to acknowledge us, people in the community look down on us. There are a lot of parallels.”

A health worker receives a dose of the Pfizer vaccine in Chile. Picture: Javier Torres/AFP

In the 1970s, Australian troops who had returned from Vietnam began to experience high incidences of cancer and other illnesses, with the government initially denying exposure to Agent Orange and other chemicals sprayed by the US military was to blame.

While health regulators and drug manufacturers including Pfizer have previously denied any causal link between the vaccines and neurological symptoms, the tide appears to be slowly turning as a growing number of experts call for more investigation.

Earlier this year, Sydney woman Daniella Lenarczyk, 34, spoke out about her persistent symptoms that included migraines, tinnitus, neck pain and numbness in her arm.

In the US, the National Institutes of Health conducted a small observational study last year of patients who reported neurological problems within one month of Covid vaccination, including pins and needles in the face or limb, orthostasis – sudden decrease in blood pressure when standing or sitting – heat intolerance and palpitation.

That paper, currently in preprint, concluded that “a variety of neuropathic symptoms may manifest after SARS-CoV-2 vaccinations and in some patients might be an immune-mediated process”.

“There doesn’t seem to be a majority theory,” Dr Faletic said.

“Whilst we’ve all been damaged in the same way, our cluster of symptoms vary from person to person.”

In a statement, the TGA said it “monitors the safety of Covid-19 vaccines using information from a variety of sources, including analysis of adverse event reports submitted to the TGA, emerging published literature, worldwide safety data submitted by vaccine sponsors and information shared by international regulators”.

“If the TGA identifies a safety concern it will take regulatory action to address the safety issue and promptly provide information to the public,” a spokeswoman said.

Those have included the addition of hypoaesthesia (reduced sense of touch or numbness) and paraesthesia (an unusual feeling in the skin, such as a tingling or crawling sensation) to the PIs for Comirnaty (Pfizer) and Vaxzevria (AstraZeneca).

More than 59 million vaccine doses have been administered in Australia. Picture: Brendan Radke

The Covid-19 vaccine claims scheme allows people to claim a one-off payment ranging from $1000 to $20,000 for lost wages or other expenses if they suffer a bad reaction, and in cases of death the family may be able to claim funeral costs.

But the scheme has been criticised by legal experts and victims as overly complex and narrowly targeted towards a very limited number of officially recognised adverse effects.

Services Australia confirmed it had received 2225 applications as of June 2. Of these just 16 have been approved, 49 have been withdrawn and 671 are “waiting further information from applicants”.

“The assessment process can be complex, and claims may also be reviewed independently by medical and other appropriately qualified experts,” a spokesman said.

“In many cases, Services Australia has had to seek additional information from applicants in order to further progress consideration of their application. In other cases, applications have also been withdrawn. If found eligible, applicants are given up to six months to accept an offer of compensation, therefore finalisation of claims may also take some time.”

Services Australia declined to provide any data on the amounts of payouts or types of claims, citing privacy concerns due to the small number involved.

According to the TGA’s most recent safety update, there have been 129,995 total adverse event reports from 59.4 million vaccine doses administered to June 5.

Eleven deaths have been ruled as likely linked to vaccination, all after AstraZeneca.

No deaths have been officially linked to Pfizer in Australia from around 41 million doses administered.

In New Zealand, three deaths have been ruled as likely due to vaccine-induced myocarditis after Pfizer, from around 11 million doses.

Last month, the family of one of the 11 Australians who died after receiving AstraZeneca spoke out for the first time.

Speaking to ABC Radio, her children said while they still supported Covid vaccination, they felt let down by the lack of government support.

They said they believed they were entitled to a lump-sum payment of $70,680 plus funeral expenses, but were critical about the complexity of the application process.

Her son Ross said reading through the vaccine claims policy, it felt callous.

“It’s a policy that’s designed to protect medical professionals from legal repercussions if something happens, like to my mother,” he said.

“My understanding is that it is to facilitate the actual vaccine rollout, so the doctors aren’t scared to administer vaccines. But for people who have suffered from the side effects, it feels like we’re just an afterthought to that.”

Dr Faletic said he had also looked over the scheme carefully and “it’s absolutely clear they’ve written it to not include people like me”.

“From a philosophical point of view we had these massive, broad, sweeping economic sanctions on all of us – lockdowns, travel shutdown – all done because someone may transmit Covid, the precautionary principle,” he said.