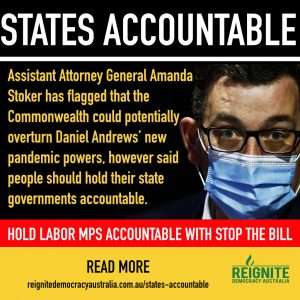 The Assistant Attorney General warns the Commonwealth could “legislate over” Daniel Andrews’ “appalling” new pandemic powers but has instead called for caution.

Assistant Attorney General Amanda Stoker has flagged that the Commonwealth could potentially overturn Daniel Andrews’ new pandemic powers, but said the “best way” to handle it was through the ballot box.

Ms Stoker said the new laws which would give the Premier the ability to declare a pandemic and extend it in three-month blocks were “appalling” but stressed that the Morrison Government’s role was a “bit of a vexed one”.

“The Commonwealth could, if it wanted to, rely on the external affairs power to try and… cover the field to legislate over this,” Ms Stoker told Sky News Australia.

“But I would warn for caution before suggesting that’s a good call.”

The bill, which passed in the lower house on Thursday, will also give the Health Minister the jurisdiction to make “pandemic orders” as well as provide them with wide-ranging legislative power.

If you click on the below link it will take you to a form for Amanda Stoker, the Assistant Minister to the Attorney General, who has already expressed interest in stopping this ridiculous bill.

If you fill in the form in the link and copy and paste the following into Section B: Your Question:

“Dear Minster Stoker
I implore you as the Assistant Minister to the Attorney General, to please help us and intervene in stopping the monstrous conduct of the Premier of Victoria. Please halt the proposed legislation of the Premier’s State of Emergency Law.”

Alternative to part B

Whatever you start with it is my will and finish with, “What say you”. Both powerful statements are used to express the will of the people which parliamentarians are meant to represent and you are also demanding a response.

It is my will that you take action as the Assistant Minister for Attorney general to stop the Premier of Victoria in his push to introduce permanent “Pandemic Legislation” into Victoria.

In Victoria and other states, we have already seen enough of an erosion of our Constitutional rights. State governments across the Commonwealth of Australia have bypassed our Constitution section 51 (xxiiA) by mandating a vaccination policy to work. As the onus is on the employer now rather than the individual they are claiming it is not a breach of Section 51 (xxiiiA).

We are also seeing conflict between state and Commonwealth Corporations acts and the power corporations have over the individual. We are now seeing a time where corporations are claiming ownership over people. This must stop.

Commonwealth Constitution section 109 deals with these inconsistencies but that doesn’t seem to matter to these tyrannical State Premiers.

We are seeing the slow erosion of all our freedoms and what makes us individuals. I ask where do you see the future heading for your children and all children around this country if this is allowed to continue. 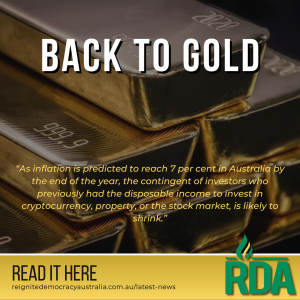