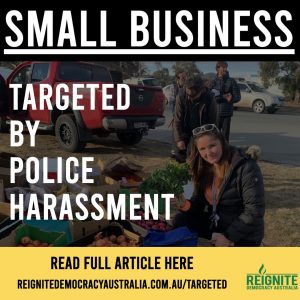 We are coming! Jindabyne business fights to keep their business open.

Small business owners of a café and organic wholefoods store in Jindabyne – Sheridan (Sheri) Gill and Scott Kraus – are taking their fight all the way after being unfairly targeted by the NSW Government, police, and local media for not complying with COVID directions, when they have in fact done nothing wrong.

Both were repeatedly harassed, manhandled and subsequently arrested for not wearing masks when they actually hold valid exemptions.  Some of their staff and patrons also have valid exemptions but have been equally intimidated by police to either wear masks or show and prove their exemption status – despite the government guidelines clearly stating this is not required1.  Not only is this treatment discriminatory but also unlawful – even under their own guidelines.

Should a staff member or customer present with an exemption, the business is compelled to oblige given that “you are not required to wear a mask if you have a physical or mental illness, or disability, that makes wearing a mask unsuitable.”2; and that it is not a requirement under the public health order to provide a medical certificate as proof3.  Not to mention the fact the business is a café so of course patrons won’t be wearing masks if they are eating or drinking!

These well-loved members of the community and parents of a 3 year old daughter recently had their livelihood ripped out from under them with the closure of their business for these alleged breaches of guidelines – completely unfounded given they have had their COVID-safe plan registered since requirements were established in 2020, established a check-in procedure long before QR codes came in, and ensure all staff and patrons wear a mask if they do not have a valid exemption.   Even when presented with additional guidelines, they also agreed to comply – yet continued to be unfairly made an example of with both the NSW Government website4 and the Canberra Weekly5 reporting incorrect facts.

Other businesses in the area have been sighted by residents to have staff and large numbers of patrons not wearing masks or social distancing, evidently breaching per square metre rules, and not forcing people to check in.  So why then are they not subject to the same scrutiny that this small business is?

Is it because Sheri and Scott always put their staff and customers first, respecting their rights to privacy and making them feel comfortable if they have mask exemptions?  Is it because they administer the guidelines without fear or coercion, without bullying their own staff or customers? Is it because they are willing to stand up for their legal, lawful rights? Or is it because they are a small organic food business, providing wholesome, immunity building food options to their community and only large corporations, big chains, and unhealthy food suppliers (that supress our immune systems) are allowed to operate these days?

In a clear attempt to discredit this young couple, spread fear and scare customers away, a local newspaper, the Monaro Post, reported that “a number of customers at the café were also charged with not wearing a mask”, which is a false claim.  As confirmed by customers attending the café, they were repeatedly harassed and intimidated by police, but no-one was issued a fine as they all had valid exemptions.  The article then goes on to say that a detention application was issued to essentially send Sheri and Scott to jail – a blatant lie – which police have since confirmed was not the case and they have no intention of doing so.  Obviously, because there was no breach here.

“They had an opportunity to do the right thing for our community, and to report the truth, but instead they chose to spread lies”, said Sheri.  “I was terrified all day after reading that article that I would be sent to jail for doing nothing wrong. What would happen to our daughter?  As a mother, I was devastated…only to find out later that it was completely untrue.”  The mental toll this situation has taken on this young family is unconscionable, and since being arrested, having their business closed unlawfully, and seeing their good names defamed, Sheri in particular is uncomfortable to leave her home for fear she will be a target again.  “This has affected my life on every level.  I feel targeted in my own community that I love – to the point where I am nervous to even leave the house”. Despite having an exemplary police record, a valid condition for not being able to wear a mask, and being an otherwise confident and outgoing person, Sheri now feels anxious going out for groceries or even driving her daughter to the park in case she is singled out by police again and further ridiculed for her condition.

When their business closed, Sheri and Scott had to clear thousands of dollars’ worth of produce – choosing to give it away to their loyal customers rather than sell it or have it spoil.  Testament to the kind and respected people they are, some of their suppliers even voided their invoices so they no longer had to pay for items they were not able to use. Residents are appalled at the treatment this family have received and have shown their support by bringing them meals, flowers, hugs (and elbows!), appreciation, and love.  “I can’t believe what happened to this really lovely couple who provide an incredible service to our community” one resident said, “it’s very sad and upsetting.”

Having recently suffered the devastating bushfire affects and losing 6 months trade already, the small town of Jindabyne is just trying to get back on their feet and get on with their lives, but it’s getting even tougher for residents seeing their friends and family under such unlawful pressure and unnecessary force.

In an incredible show of strength and spirit however, Sheri and Scott are not going to bow to the pressure and their unlawful treatment.  Willing to fight for their rights, for their staff and for their community to keep this much needed business open, they have engaged a law firm to take this all the way…and with the community behind them they will not give up until justice is served and the truth prevails.

You can read more about this courageous family and the facts around their arrests in a press release put out by their lawyers here: “Masking over the real story of store closure”.

** Since this article was written, Sheri and Scott have been able to re-open their business (winning!) so go check it out if you’re in the area – The Market Jindabyne – and show them your support.  RDA will be interviewing Sheri soon so stay tuned to hear more of their story then.

We are coming! Jindabyne business fights to keep their business open.