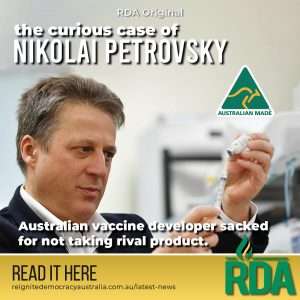 ‘It was all very well to say “Drink me,” but the wise little Alice was not going to do that in a hurry. “No, I’ll look first,” she said, “and see whether it’s marked ‘poison’ or not.”’

Unfortunately, this is not a made-up story. This is exactly what happened to Nikolai Petrovsky.

Petrovsky (the Director of Endocrinology at Flinders Medical Centre) developed the COVAX-19 vaccine – a protein-based shot with plant-derived adjuvants and has seen the product successfully through phase 3 trials.

Yet despite some calling it ‘Australia’s most advanced COVID vaccine’, it is not currently approved for use here. In Iran, the vaccine (known as Spikevax) is already being rolled out under Emergency Use Authorisation.

Petrovsky has been forced to set up crowdfunding simply in order to get his vaccine in the door, with the TGA requiring the exorbitant fee of more than $300,000 just to assess his application. He has since raised over $500,000 in donations, much of these from ‘concerned Australians who are being threatened with loss of their jobs if they don’t comply with onerous government vaccine mandates and who at the same time are being prevented from having access to a safe and effective protein-based vaccine alternative’.

In an in-depth interview with “Discernable”, Petrovsky shared his views on how vaccines should never be mandated and that liability should be placed squarely on the shoulders of vaccine manufacturers to ensure accountability and safety.

Regrettably, these views are being ignored by both the government and his own employer. A vaccine developer (who has taken his own vaccine), finds himself effectively out of a job because he won’t dose himself with a rival’s product.

Rebecca Weiser, in an exceptional Spectator feature ‘The Petrovsky Affair’, puts it like this: ‘Petrovsky was sacked even though he may well have better immunity than those who are sacking him.’

Things just seem to be getting out of control as our rulers continue to invent rules out of thin air. Sadly, it would seem that we are all growing mad down in this rabbit hole.

Let’s just hope we can wake up soon.

What is Covax-19? Australia’s most advanced COVID vaccine candidate (University of Queensland)

Bringing COVAX-19 back to Australia (GoFundMe)

The Petrovsky Affair (The Spectator)