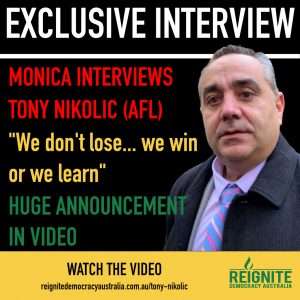 RDA is the first to speak to Tony Nikolic after the judgment was handed down at 4 pm today.

We also discuss our upcoming Federal Court Action with Monica Smit as the lead plaintiff.

We don’t lose…we win or we learn!

Join over 15,000 others who have committed to HOLDING THE LINK here –

See the statement of claim below and filing details below.