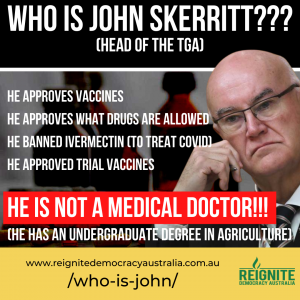 Who is John Skerritt? (head of TGA) Why has he banned Ivermectin?

He is head of the TGA, but did you know he has a bachelor’s degree in Science, majoring in Agriculture?. He is not a medical doctor and has never treated any patients. He has no clinical experience with covid19. He has a PhD in Pharmacology but immediately after that, for 20 years wrote all his papers on wheat. An expert on wheat is approving vaccines and making decisions on treatment. Before being appointed to the TGA position in 2012, he was deputy secretary of Primary Industries, Victoria. Yes, Agriculture again.

On September 10, 2021, Professor John Skerritt made it no longer possible for GP’s in Australia to prescribe ivermectin for covid19. Up until that day, they were able to prescribe off-label. The TGA statement can be found here:

An excellent review of this decision by England’s Dr John Campbell is here;

The first reason given on the government website, for this extraordinary announcement was;

“The Department is concerned that there are a number of significant public health risks associated with this practice including, for example, that persons taking ivermectin in an effort to prevent COVID-19 consider themselves to be protected against the disease, elect not to be vaccinated as part of the national COVID-19 vaccination program, and chose not to get tested or seek medical care if they experience symptoms. “

So, it’s dangerous because it creates vaccine hesitancy?

What happened in the lead up to this extraordinary decision on September 10?

Well, there was a group of Australian doctors treating patients in Sydney and Melbourne in July, August, and September with a protocol called the Ivermectin Triple Therapy (ITT). A combination of repurposed drugs, ivermectin, doxycycline, and zinc. It was an amazing success.

600 patients treated, and only 5 admitted to hospital and zero deaths.

The equivalent control group in Australia of 600 people, not treated with triple therapy, resulted in 70 admitted to hospital and 6 deaths.

This is real-world data.

Did John Skerritt know about this Australian trial? Was that a factor in the September 10 decision?

Well, let’s look at professor Skerritt’s answers to Senator Rennick’s questions on the use of ivermectin for covid19 in the senate estimates committee hearing on October 27.

At this hearing, John Skerritt stated that “3 – 5 mg per day is the recommended dose” and anything higher is dangerous. He referred to alleged cases of poisoning in the USA but does not state the dosage used in these incidents or what form of ivermectin was used.

The current recommended dose for Strongyloides or scabies in Australia is 200ug/kg body weight, so a 90kg man would take 18 mg of ivermectin per day.  This means 3-5 mg per day is not the recommended ivermectin dose currently in Australia. You would have to weigh only 15 kg to be on that dose. John Skerritt’s statement in this hearing was false.

Senator Rennick also said that  Merck, the old manufacturer of ivermectin, had no safety concerns in 2013 for ranges of 30 – 120 mg. These are far greater dosages than those quoted by John Skerritt. See here at the TGA’s own website, on page 18.

“…… showed good tolerability and no safety concerns at doses ranging from 30 to 120 mg, that is, up to 10 times the proposed dose of 200 µg/kg for treatment of scabies’’

At present, Australia, 20 months into this pandemic, still only has an early treatment protocol of “take Panadol and wait till you can’t breathe, then call the ambulance”.

In other words, no treatment.

What is the real reason that John Skerritt has banned the use of ivermectin for covid19 in Australia? 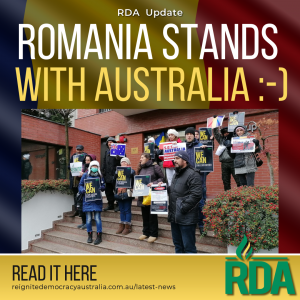 I am lost for words…I have tears in my eyes. Words cannot explain our gratitude to your beautiful people!!! We will not give up!!! thanks 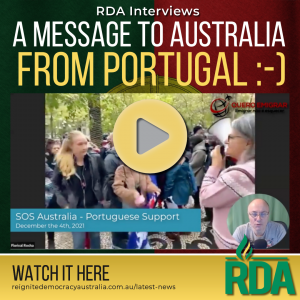 A message to Australia from Portugal :-)

This brought tears to my eyes. THE WORLD IS UNITING!!! 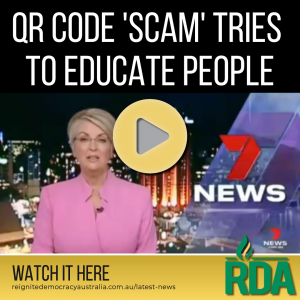 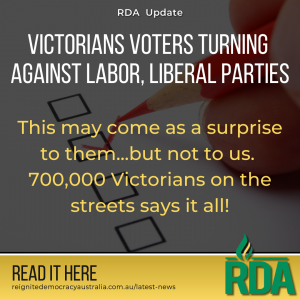 SEE THE HERALD SUN ARTICAL HERE Major Events Minister Martin Pakula has backed voters to return to Labor in time for the next state election,

Who is John Skerritt? (head of TGA) Why has he banned Ivermectin?