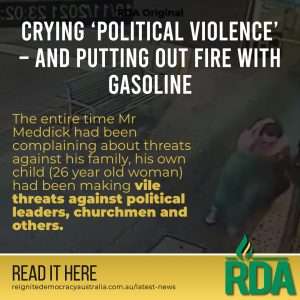 Crying ‘political violence’ – and putting out fire with gasoline

When Andy Meddick’s child was hit in the back of the head with their own spray can (which was acting rather like a boomerang) the Victorian Aninal Justice MP cried “my worst fears have turned into reality”.

“Last night my beautiful daughter was attacked on the street,” he said in a statement released via his Twitter account at 1.42 pm Friday.

“I have reason to believe that this could be linked to my role as an MP and the positions I have taken on the pandemic response.”

But just two hours later, at 3.30 pm, the Animal Justice Party MP was telling ABC radio he had no clue whether the attack was political, or if the attacker even knew who his child, aged 25, was.

There was only an “indication” based on a “feeling” that it could perhaps have been connected to his support for Daniel Andrew’s controversial Pandemic Bill.

“That’s something that can only be determined if they catch the perpetrator and ask them,” he admitted to the ABC’s Raphael Epstein. It was quite possible that his child had “put two and two together and come up with five”.

But the story of the politically motivated attack on a transgendered woman — whose only crime was to have been the child of a democratically elected MP — had already exploded across social media.

It was being presented as evidence that those protesting the Pandemic Bill were — as Meddick himself had described them earlier last week — “neo-Nazis, conspiracy theorists and merchants of hate”.

“Insults, intimidation and incitement can all have very real and absolutely devastating consequences,” Meddick scolded when he tweeted about the attack on his child.

The inference was that his political opponents, whom he had lately been accusing of failure to condemn extremist rhetoric in the community, were in part responsible for the attack.

At 3.13 pm, just before Mr Meddick admitted he didn’t know the reason for the attack on his child, the Prime Minister condemned it as “not just an attack on an innocent person but an attack on our very democracy”.

Crying ‘political violence’ – and putting out fire with gasoline