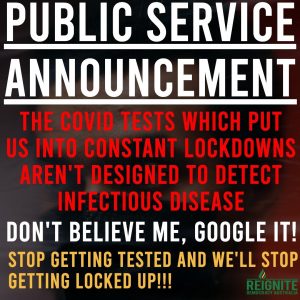 It really is THAT SIMPLE!

Please share this far and wide…tell your family and friends to STOP GETTING TESTED.

It’s these tests that are being used to justify our home imprisonment.

The inventor of the PCR tests said himself that they are not meant to detect infectious diseases.

See for yourself in this presentation;