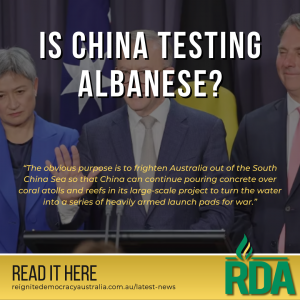 On the week of the federal election, the first (of what will probably be many) people smuggling boats tested Australia’s resolve when it comes to illegal immigration. Labor’s failure to secure the borders from crime rings is well known, particularly with an activist fraternity of so-called human rights lawyers poised to make a fortune. Lawyers who showed no interest in the plight of Australian citizens for the last two years…

China – ever the victim, as all expansionist dictatorships are – has complained about an incident on May 26 which saw a Chinese military aircraft (J-16 fighter) buzz an RAAF plane. The interaction played out over the hotly contested South China Sea, which China is trying to wrestle out of the shared hands of its Asian neighbours.

‘The intercept resulted in a dangerous manoeuvre which posed a safety threat to the P-8 aircraft and its crew. The Australian government has raised its concerns about the incident with the Chinese government,’ confirmed a spokesperson for Defence.

On this occasion, the Chinese fighter cut in front of the RAAF plane and released flares (which are used to deter missiles). The act resulted in small pieces of aluminium dangerously showering the RAAF plane. Australia has described the act as one of deliberate and ‘explicit aggression’.

‘It’s about wanting to make the PLA – the Chinese military – such a risky, dangerous, entity to approach that other forces have to give them a wide berth and get out of their way for their own safety, and the safety of the PLA,’ said Michael Shoebridge, from the Australian Strategic Policy Institute.

The obvious purpose is to frighten Australia out of the South China Sea so that China can continue pouring concrete over coral atolls and reefs in its large-scale project to turn the water into a series of heavily armed launch pads for war.

You won’t catch any Greenpeace vessels or United Nations climate activists complaining about the destruction of these Pacific paradises, whose apparently ‘endangered’ reefs have been carved out to make way for deep water military ports, flattened into airstrips, and – for the bigger islands – turned into floating military bases complete with troop barracks and missile launch pads.

There are no concerns about ‘rising sea levels’ or ‘apocalyptic Climate Change’ inside the Chinese regime – except where they seek to profit from Western nations dismantling their robust power systems in favour of Chinese solar panels and wind turbines.

And yes, this is the same China that complains about ‘hurt feelings’ if an Australian Prime Minister talks about the CCP’s repeated human rights abuses. What about Australia’s ‘hurt feelings’ when it comes to China preparing for the violent conquest of the Pacific and cutting off Australia’s supply lines?

The militarisation of the South China Sea has been going on for some time, including during the era that Australian politicians and bureaucrats naively believed the regime’s claims of ‘non-interference’ in geopolitical affairs. Neighbouring Asian nations that share the South China Sea have long been traumatised by China’s aggressive moves and violation of agreed international behaviour. The United Nations left it to America to police the region in a semi-official capacity, but former US President Barrack Obama was a notable failure on this front, cuddling up to China while smaller nations begged America for help.

China’s deliberate political and economic isolation of Taiwan is reaching a crisis point. After signing the notorious pact with the Solomon Islands (one of Taiwan’s previous friends and trading partners), the Chinese government is hoping that it has bought and threatened enough leaders in the region to finally coerce the Taiwanese government into giving up its sovereignty without a fight. It would be a cataclysmic geopolitical event, not only for the people of Taiwan who face a Hong Kong-style dismantling of their culture and civil rights, but also as Taiwan is the keeper of a vital trade route that nations like Australia and Japan rely on.