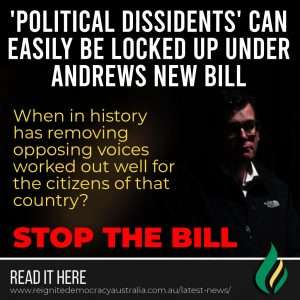 Political Dissidents Can Easily Be Detained Under New Bill

Victorian Premier Daniel Andrews is setting himself up to become Victoria’s first dictator with a monstrous new bill that grants him enormous new powers.

Amongst the many infringements to our freedom, this bill allows Daniel Andrews to call a state of emergency whenever he pleases with the Health Minister issuing directions. These directions can be any order that the Minister believes is reasonably necessary to protect public health. As we have previously seen, the Victorian Government seems to believe that a 9pm curfew (which they never bothered to properly defend) is “reasonably necessary”, as is a vaccine mandate which asks Victorians to choose between the risks of taking the vaccine and their employment. So, it seems that what is “reasonably necessary” could amount to pretty much whatever Andrews and his cronies wish to impose upon us.

What about oversight? Well, the oversight committee proposed will no doubt be handpicked to rubber stamp Andrew’s decrees rather than to provide any meaningful accountability.

Even more egregiously, the bill allows Andrews to target people based on “certain characteristics”. While it is not yet specified what these characteristics maybe, we can take a reasonable guess that this will include the unvaccinated as well as Andrew’s critics, allowing him to silence dissent whenever he wants. In fact, with the breadth of powers available to him with this new bill, he can pretty much target whomever he wants. Participation is certain “events” is also explicitly mentioned, no doubt to allow Andrews to lock up anyone who dares protest his new regime.

Once locked up, even if you are lucky enough for a review board to allow you to go free, then the bill states the Government is not accountable. This means that there is no deterrent to them locking up whomever they want before letting the review board sort it out later. This legalises arbitrary detention: Lock them up first, ask questions later. Plus, the police are not liable for anything they do in “good faith”, which is sufficiently vague to allow many future perpetrators of police brutality to walk free. After all, they just beat you bloody to keep you safe.

As for those Andrews targets, this bill states that those refusing to comply could be landed in jail for up to 2 years.

Make no mistake, this bill is the making of a dictatorship. If you think that you are safe because you have been complying so far, there is no guarantee that one day you won’t find yourself on the hitlist for Dan’s commissars. Victorians need to stand up now or be forever silenced by our cheap Chinese copy of Stalin.

As for the rest of Australia, stay vigilant. If you too don’t make a stand now, this could be the fate awaiting you too.

To see a more in-depth analysis of this bill, check out the MCJ Report here:

Political Dissidents Can Easily Be Detained Under New Bill