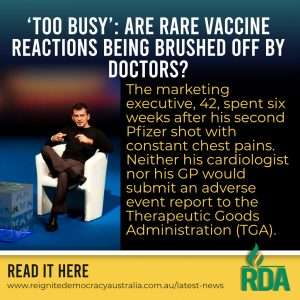 ‘Too busy’: Are rare vaccine reactions being brushed off by doctors?

Dan Petrovic doesn’t regret getting Pfizer despite suffering heart inflammation – but says his experience has raised questions about how rare side effects are reported.

Dan Petrovic describes himself as an avid “pro-vaxxer” who has long advocated vaccines to his more hesitant friends – so it was a “comedy twist” when he was the one who suffered a rare side effect.

The marketing executive, 42, spent six weeks after his second Pfizer shot with constant chest pains, which his GP ultimately said was likely a mild case of pericarditis, or inflammation of the lining around the heart.

On September 18, four days after his jab, Mr Petrovic began to feel unwell while watching TV.

“I can’t lean to the left side, I feel a bit short of breath,” he said.

“It’s just like constant pain and palpitations. It doesn’t go away. Imagine enduring six weeks of that.”

Mr Petrovic, the managing director of search engine marketing firm Dejan, said he was bemused that for “six weeks of pain, they classify it as subtle and mild”.

“This wasn’t a little bit of pain, this hits really hard and it was lingering for a long time,” he said.

“It’s a debilitating condition – can’t work, can’t walk, can’t walk up and down the stairs, can’t play with my daughter.”

After weeks of “ping pong” between appointments and $3000 in medical costs, he has now largely recovered with only a “little bit of pain” once a week.

While he still doesn’t regret taking the vaccine, Mr Petrovic says one thing concerns him.

Neither his cardiologist nor his GP would submit an adverse event report to the Therapeutic Goods Administration (TGA).

‘Too busy’: Are rare vaccine reactions being brushed off by doctors?