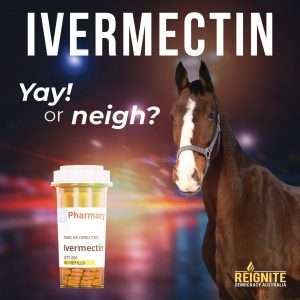 Yay or Neigh: What’s the Deal with Ivermectin?

It would be the ultimate dinner party argument starter… that is, if we were still allowed to have dinner parties. Ivermectin. It’s either a miracle drug or a horse dewormer – the opinion varies depending on who you talk to.

Popular podcaster, Joe Rogan accidentally stoked the debate when he casually mentioned that he ‘threw the kitchen sink’ at his virus symptoms – using monoclonal antibodies, NAD, a Vitamin D drip and ivermectin to beat COVID-19 in just three days.

CNN reported that he took horse dewormer, perhaps following on from the FDA’s condescending tweet (‘You are not a horse. You are not a cow. Seriously, y’all. Stop it.’) about the drug a few weeks ago. Rolling Stone promptly stepped in a steaming pile of its own creation by claiming a plague of ivermectin overdoses at a rural hospital in Oklahoma, which turned out to be a fabrication. MSNBC news host, Rachel Maddow, failed to verify the story before diving headlong in the mess. A report was made attempting to link ivermectin to male infertility, but it backfired when the FDA issued a public statement that this was not a known side-effect. Even the Associated Press had to backpedal, after falsely claiming that ivermectin was responsible for 70% of the poisoning cases reported to Mississippi Poison Control – it turns out the correct figure was only 2%.

Nevertheless, the shit storm continued, with our own TGA coming out with new restrictions for the prescription of oral ivermectin. They cautioned that GPs are now only able to prescribe it for already approved conditions, such as scabies and parasitic infections. Apparently, it turns out there was an unexpected increase in consumer demand that led to drug shortages.

So, what is it about the medicine that is so polarising?

For a drug that has been used in humans for 40 years, that’s on the WHO’s list of essential medicines, with ‘almost no side effects’ and with a solid safety profile making overdose very difficult (‘doses up to 10 times the approved limit are well tolerated by healthy volunteers’); the media’s treatment of ivermectin has been nothing short of extraordinary.

Funnily enough, until COVID-19 came along, scientists couldn’t sing enthusiastically enough about the wonders of the Nobel-prize winning formulation. It was a ‘versatile drug with unique characteristics’, an ‘enigmatic multifaceted wonder drug’ that was ‘continuing to surprise and excite scientists’ due to its ‘unexpected potential as an antibacterial, antiviral and anti-cancer agent’. Drug company, Merck, benevolently bestowed millions of doses on impoverished patients in West Africa to treat river blindness.

The first suggestion that ivermectin may be useful in treating COVID-19 came from within our own shores, with a lab discovery at Monash University, Clayton. Evidence of success on the ground began to roll in from all around the world. A study in Argentina found that zero patients who used a combined ivermectin and IotaCarrageenan program became infected with COVID-19. This is remarkable on its own, but even more so when compared with the PPE group, which reported an ‘overall infection rate of 58.2%’ (237 out of 407 people). Since then there have been many more reports by frontline doctors with favourable results, which includes comparisons between the vaccine and ivermectin roll out in Peru, findings of a 73% reduction of SARS-CoV-2 infection among healthcare workers in India, and a trial of health care workers who took ivermectin chemoprophylaxis. These workers had an 83% lower risk of contracting COVID-19 in the following month.

Closer to home, Australian Professor Thomas Borody developed a ground-breaking ‘Triple Therapy Protocol’ in August 2020, to enable treatment of the vulnerable elderly and frontline workers. Emeritus Professor Robert Clancy, a Senior Clinical Immunologist of the University of Newcastle has also backed the drug, telling Paul Turton on ABC Drive (in a now mysteriously scrubbed interview) that the science was ‘crystal clear’. Recently, Dr Phillip Altman (Honours in Pharmacy, Master of Science and a Doctor of Philosophy (in both pharmacology and pharmaceutical chemistry) wrote an open letter to the head of the National COVID Clinical Evidence Taskforce, begging him to demand ‘revised recommendations for the use of ivermectin within 14 days’.

Ivermectin is effective when used as prophylaxis (to stop you from catching COVID-19), as an early treatment in order to reduce symptoms and to reduce the severity of the disease. An American Journal of Therapeutics peer-reviewed meta-analysis reported ‘moderate-certainty evidence finds that large reductions in COVID-19 deaths are possible using Ivermectin’ – a finding that has stood strong, despite a number of attempts to discredit it (including the error-riddled Roman et al paper and the Cochrane review). One could easily spend days reading the multitude of papers now available in support of the use of ivermectin.

So why are we not, as they say, ‘following the science’?

Some are demanding even more robust evidence (despite the fact that they gloss over any such requirements for vaccine trials), pinning their hopes on the Oxford University PRINCIPLE trial, the design of which has already raised a few concerns in scientific circles.

The fact is, we already have more than enough data to be able to roll out this cheap, safe and effective drug. If the aim is to reduce deaths from COVID-19, any curtailing of this treatment is unsupportable. Governmental and regulatory resistance is, at best, puzzling, and, at worst, potentially criminally negligent – in that the lives of so many are at stake here.

We don’t even care what you want to call it. Just let us have the damn horse medicine!

Ivermectin, ‘Wonder drug’ from Japan: the human use perspective

The multitargeted drug ivermectin: from an antiparasitic agent to a repositioned cancer drug

Effect of Ivermectin on Anopheles gambiae Mosquitoes Fed on Humans: The Potential of Oral Insecticides in Malaria Control

Safety, Pharmacokinetics, and Activity of High-Dose Ivermectin and Chloroquine against the Liver Stage of Plasmodium cynomolgi Infection in Rhesus Macaques

Ivermectin for Prevention and Treatment of COVID-19 Infection: A Systematic Review, Meta-analysis, and Trial Sequential Analysis to Inform Clinical Guidelines

Evidence regarding ivermectin: A collation of studies 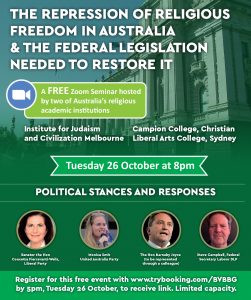 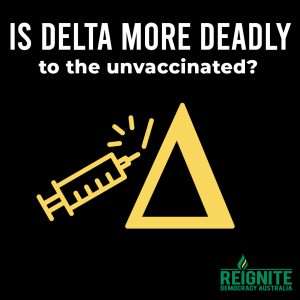 Yay or Neigh: What’s the Deal with Ivermectin?