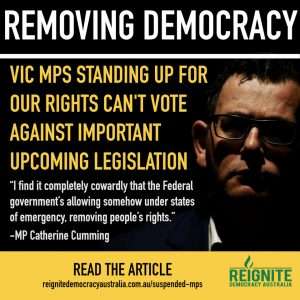 In a Parliamentary sitting last Thursday, Victoria has extended the theme of medical discrimination to the floors of Parliament, deciding in a 31 to 4 vote that all MPs entering Parliament will now be expected to produce proof of vaccine status.

In a motion introduced in the Upper House by Emergency Services Minister Jaclyn Symes, it is now required that MPs must provide proof of vaccination or proof of a vaccination booking, with anyone failing to comply with the order suspended from entering or voting in Parliament until 2022 and having security access passes revoked until such time.

This is a national first for Australia, with Victoria again leading the way in further dismantling our fundamental human rights and now determining which medical procedures are a requirement to represent the public in a democratic nation.  A more suitable example of an oxymoron couldn’t exist.

It might interest you to read which MPs supported the continuation of this medical tyranny, beginning with the duo representing a party that showcases policies supporting equal rights and justice for all. We were surprised to see both Tania Maxwell and Stuart Grimley from the Justice Party voted in favour of the motion, thus supporting the medical discrimination of their peers. These MPs have appeared seemingly measured throughout this pandemic, on many occasions voting alongside the people, but not on this? Why the change?

Other usual suspects who voted in favour of the bill and came as no surprise include Fiona Patten, the leader of the “Reason” Party; Samantha Ratnam, leader of the Greens and Andy Meddick from Animal Justice.

While the motion was supported by the coalition and passed, it wasn’t without some cautionary statements, including from Gordon Rich-Phillips, who called it a “very troubling motion“, but strangely he and others who displayed hesitancy still went on to support the motion.

And the MP that deserves a special mention is Neil Angus, who was the only member to vote against the bill when it was passed in the Lower House, but also according to The Age, is the only member who has also refused the medical procedure.

“The mandate is something that should never have occurred. The reason why past generations, why the legislation is written the way that it is, is so people can make free and informed decisions for themselves. And here we are forcing people to make a health choice”  … “I find it completely cowardly that the Federal government’s allowing somehow under states of emergency, removing people’s rights.”

So, the question is, where does this leave those members of Parliament who are actually standing up for our rights?

Complete list of members who voted in favour of the bill:

Read the minutes of the proceedings Here

Contact your Local MP and let them know your thoughts